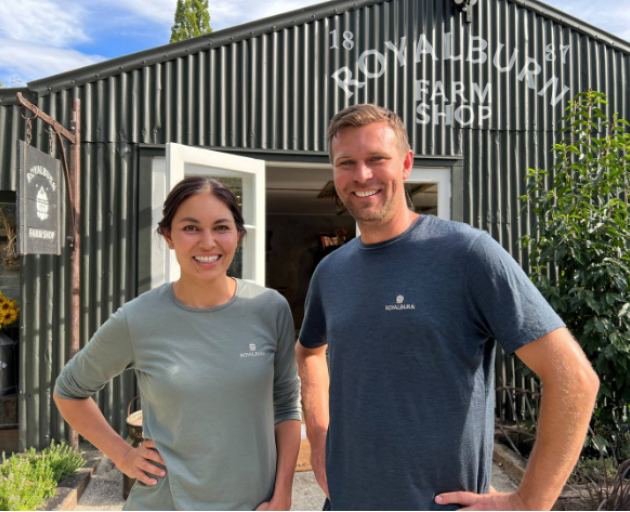 Lim and Bagrie farm at Royalburn Station, a 485ha sheep and barley farm on the Crown Range between Arrowtown and Wanaka.

The mostly spray-free station also includes a market garden, as well as egg and honey operations.

The couple are still filming their new show, which will come out at the end of October, Lim told The Country's Jamie Mackay.

"It's a real reflection of our journey since… Carlos went back into farming three years ago and we took over Royalburn Station.

"It shows all the ups and downs and realities of farming as it is."

Any misfires would also be on full display, Bagrie said.

Bagrie said the show would reflect the struggles that many farmers faced during the year.

"Every year is different right? Last season we were caught in a drought and then we've had a pretty rough winter."

The couple were keen to bring a year of farming life to an urban television audience as well, he said.

"It's an opportunity to showcase that to folk outside of the rural community, [to say] 'hey look, here's what it actually looks like, the beautiful side of farming and the parts that maybe aren't quite so beautiful'."

On Royalburn Station's website, the couple say their vision is to be "the leaders in regenerative and ethical farming", with a focus on soil health.

"The quality of our crops and health of our livestock starts with thriving underground ecosystems so our focus is on the soil, where life begins," it reads.

Critics of regenerative agriculture say the practice can be detrimental to yield and therefore affect a farmer's bottom line.

Mackay asked Bagrie if he had experienced a drop in yield at Royalburn.

Consistency was important, with some paddocks "absolutely screaming" while others were classed as "fails", Bagrie said.

The "good paddocks" were "punching" 8 - 8.5 tonnes of barley per hectare but others only managed 3 or 4 tonnes, he said.

"[That] really doesn't make that a viable crop. So, it just depends."

The couple were also spray-free, not applying fungicides or pesticides to their crops, Bagrie said.

Royalburn is 1600 metres above sea level which helped with the spray-free process, he said.

"We're high … and that [means] dry air in the summer so things ripen quite quick and we don't have any other cereal farmers near us. So, there are some things that we can probably get away with here that you might not be able to get away with at other places."

Ultimately, "you bank dollars not yield", and the farm was still managing to maintain a reasonable yield with a lower input, Bagrie said.

Although he was a fan of organic farming, Bagrie didn't see it working at a large scale in New Zealand.

"I'd say that would be extraordinarily improbable. To be able to pull that off would be, while fantastic, I think commercially, that would be a struggle."

He had more faith in regenerative agriculture, saying many cropping farmers were already adopting the practices associated with it, such as low tillage and direct drills.

"That's becoming more and more the norm in cereal farming just because it's less diesel, it's less cost.

"I think if you can maintain the cost and offset some of the spike in diesel prices, that's where regenerative agriculture comes into its own."