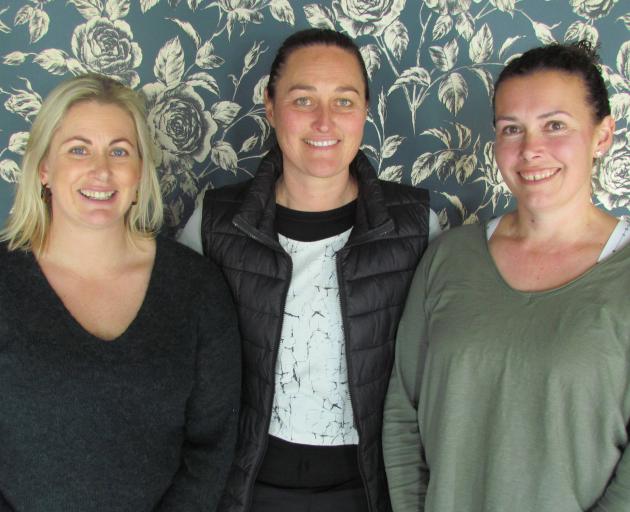 (From left) Joanna Hay, Kara Tartonne and Sarah Isbister are the driving force behind Lipgloss and Gumboots, a group created to give women in farming the confidence to add value to their business.PHOTO: ASHLEY SMYTH
A desire to give women the skills and confidence to add value to their farming business is what prompted Herbert sheep farmer Joanna Hay to start up support group Lipgloss and Gumboots.

She came up with the idea of forming a group in 2018 after attending an Understanding Your Farming Business course, run by the Agri-Women’s Development Trust.

"Doing that course made me realise there are other really similar and like-minded people in our industry, and it also gave a lot of skills and confidence," Mrs Hay said.

"The idea had sat with me for a while that it would be really cool to get a group of North Otago women together ... so we just went and talked to all of the ladies that were in those courses, and said ‘would you be interested in joining a group, specifically for upskilling?’."

Mrs Hay teamed up with friends Sarah Isbister, who farmed at Five Forks and also completed the Agri-Women’s course, and Totara woman Kara Tartonne. Mrs Tartonne had recently returned from Australia, where she was working for non-profit group YWCA as the New South Wales health and wellbeing manager. A large part of her job was working in the mental health sector with rural women.

"I’d just got back, and Jo and I just happened to have a korero in a coffee shop and she said, ‘I’ve got this idea, what do you think?’ And I just said ‘well, I have this background’," Mrs Tartonne said.

"I’m not off a farm, but I have a few skills to throw in.

"So I ... help in that real mental wellbeing side of it, which is probably more my passion."

"Whether that was the environmental knowledge side, the financial side, or planning ... and with a strong focus on health and wellbeing, too."

The group was mostly targeted towards those in the red-meat industry, although the women joked they were not "farmist".

"There are quite a few with a foot in both camps," Mrs Isbister said.

But it was definitely a group for women who wanted to be involved in their farming business.

"Most of us didn’t plan on farming. We ended up marrying a farmer. It’s about how to transfer your skills," she said.

Mrs Hay said they surveyed members about what interested them and then found speakers to accommodate those "burning issues".

"What we found really, really quickly, was there’s quite a hunger for personal development.

"We’ve been really lucky to have [professional progress coach] Jenny Malcolm in our group, and Jenny has used us as a sort of test group to try different things at various times. And they’re really well-received workshops."

There were usually up to 20 people at each event and venue space was loaned by law firm Berry & Co and accountancy firm McKenzie and Co, which had also loaned accountancy services to get the group started.

"We align it with what’s happening in the world," Mrs Tartonne said.

"With government changes or whatever. And then we get speakers to talk about that in depth, basically explain, and talk about it, as opposed to just people being fed information."

Mrs Hay said that was the beauty of the smaller-group setting.

"It’s an around-the-table discussion and everyone just fires questions. So people come away feeling like they really understand an issue."

An event in June last year was a combined meeting with similar groups in South Canterbury and the Hakataramea Valley, all born of the same Agri-Women’s course. Beef + Lamb New Zealand covered the costs and Southland-based leadership coach and 2018 Dairy Woman of the Year Loshni Manikam spoke.

"She was quite a motivational speaker on balancing life. We had a huge turnout — about 100 people."

Events were held every couple of months, working around the busy times on the farm. Mrs Hay said they were all busy people and she recognised people were not going to come just for the sake of it.

"We need to make it worth their time."