New way to work out who's who in the paddock 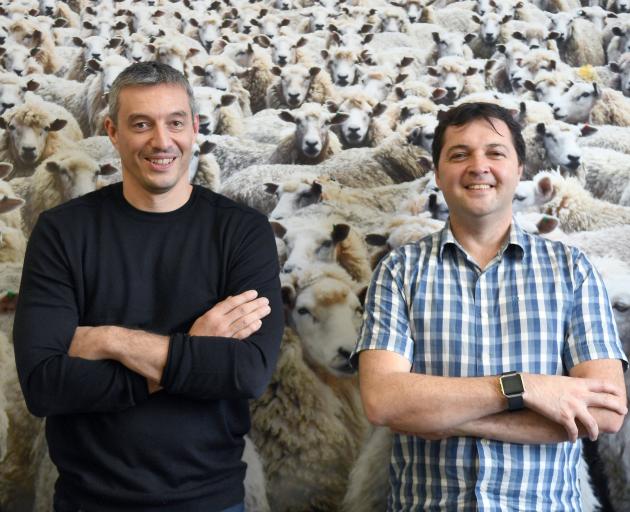 Benoit Auvray (left) and Greg Peyroux, of Iris Data Science, are working on sheep facial recognition. PHOTO: STEPHEN JAQUIERY
How do ewe tell one sheep from another?

Greg Peyroux and Benoit Auvray, the co-founders of Dunedin-based Iris Data Science, might well have the answer.

They have been working on sheep facial recognition to cheaply re-identify sheep, potentially removing the need for ear-tags while also solving other farm management and broader issues.

While facial recognition had been developed for cattle in the United States and pigs in China, the pair were not aware of anybody doing it for sheep.

Sheep face images were collected and fed into a machine-learning model.

It slowly learned by itself to identify sheep by finding recognisable features.

The project created interest when it was displayed at MobileTECH 2019 in Rotorua in April - an annual event showing digital technologies for the agricultural, horticultural and forestry sectors - and at TEXpo during the recent Dunedin Techweek.

Mr Peyroux was "cautiously optimistic'' about the potential of the project.

"In this game, just because it's a good idea doesn't mean it'll be successful.

"Many other things need to happen, but we're having a lot of fun,'' he said.

They had an early prototype and were hoping to do field trials by the end of the year.

While it could be disruptive in the industry, they would have to "see how it goes''.

Farmers wanting to use it would need to install a camera system, perhaps on a race, to collect images of their sheep.

The pair formed Iris Data Science in 2013 and a team of six was now working in the city, providing services in statistics and machine learning, machine vision, artificial intelligence, big data and information technologies.

Originally from Belgium, Mr Auvray is a statistics and machine-learning expert who moved to New Zealand in 2003 to work at AgResearch and later to the mathematics and statistics department at the University of Otago.

Mr Peyroux's experience was as an ICT leader, manager and strategist and his previous jobs included security manager at AgResearch.

Some "big players'' in the industry were talking to them about their project, while there was also interest in a deep learning pasture quality system they had developed.