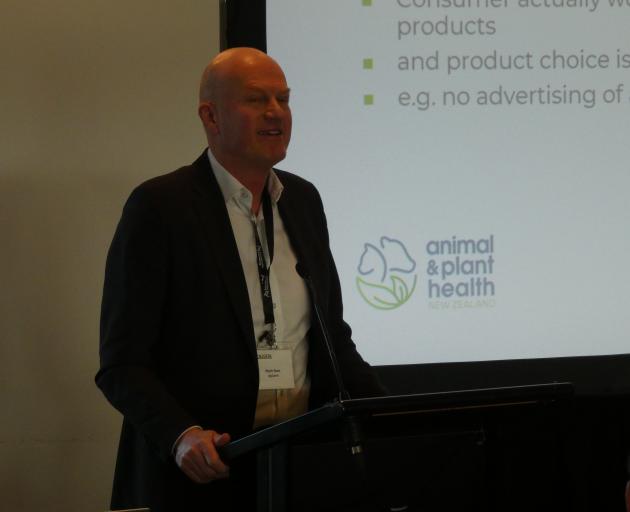 Farmers are struggling with the mass of regulation changes in front of them, Animal and Plant Health NZ chief executive Mark Ross says. PHOTO: TIM CRONSHAW
An agriculture leader is joining the chorus with the warning farmers are being bogged down by over-regulation.

Mark Ross gave a "little bit cynical" presentation to get arable representatives thinking at the Grains and Pulses Forum in Christchurch.

The chief executive of Animal and Plant Health NZ (renamed from Agcarm last week) — the industry body for animal medicine and crop chemicals — gave a long list of challenges farmers were dealing with at the moment.

He said they were struggling with many pressures, including inflation, supply chains, sourcing product, fertiliser prices, animal welfare and climate change.

"Probably one of the biggest ones ... for a lot of people at the moment is the regulatory environment we are working in. This Government in particular has a real environmental stance and wants to change the world."

He said there was little farmers could do on a farm that was not already regulated.

Farmers needed a handlers’ certificate to buy chemicals and hazardous substances that householders could buy at garden centres.

"One of the paradoxes that comes with over-regulation is that it can lead to under-regulation because regulation gets too hard and too much to implement."

He said it could also create adverse risks such as when the Department of Conservation used diesel generators to power up electronic vehicles on Stewart Island.

Over-regulation could also stifle innovation and information flows, he said.

Mr Ross said the system to register new agri-chemicals and biological products was complex with each one going through three regulators — Ministry for Primary Industries, Environmental Protection Agency and WorkSafe.

"They are all sort of connected and it’s a real laborious system and we try and navigate that for our members, but what it is doing is stifling innovation and stifling the products you might need. Most parts of the world have just one regulator that does all this."

He said regulatory trends were also coming from overseas with consumers wanting to know more about what’s in a product and "mirror clauses" were appearing from Europe.

New Zealand food was safe, but some decisions were being driven by emotions rather than science. The labour shortage wasn’t helping producers do what the Government wanted for water quality, climate change and other regulations.

The Government wants to map out all the agri-chemicals and trace how much is being used in New Zealand.

Mr Ross said they weren’t sure why this was being done because it was unnecessary as there was great stewardship in New Zealand and a lot of programmes doing this.

He said it was a concern that there were regulators and policy people who had never been on a farm or orchard.

"Any regulations based on good science and practices, we have to have that happening. You can’t have emotion driving out our regulation. It has to be well crafted and reduce a particular risk."