A difficult fishing spot on the Tokomairaro. PHOTO: MIKE WEDDELL
Over the past week rivers have dropped and water temperatures have risen, enough to make the most pessimistic of anglers dare to hope this weekend will offer a good chance of catching a fish or two.

Of course, there is still time for things to go wrong but I think those that are keen enough will find somewhere to fish.

The Taieri is looking like a good bet as it drops and clears. The catchment is relatively dry and it would take a considerable amount of rain to spoil things.

The likely waters to fish are extending further south than those I mentioned last week. The Waipahi is at a good level. So, too, is the Waiwera and even if they rise, they tend to drop quickly.

The Pomahaka is a great spring river as it has a good population of mayflies. They hatch from noon onwards at this time of year and even a few insects hatching will bring trout to the surface.

The Taieri, too, has mayflies, the Strath Taieri section of the river probably being the best for them, followed by the Maniototo. If travelling to fish in these areas, it pays to be mentally prepared to fish what can seem to be fishless waters in the morning until insects become active and trout show themselves in the afternoon. It is not impossible to catch fish in the morning at this time of year; persistently fishing a weighed nymph can produce a few trout.

Stillwaters are worth a try if rivers are not up to scratch. Again, it is often the afternoons that give the best chance. Stillwaters take longer to warm up than rivers, so it pays to fish deep unless there is some surface activity. If two flies are fished — a larger, heavier fly on the point and smaller, lighter fly on the dropper 70cm or so above the point fly — two different depths can be fished at the same time.

One stillwater that is worth a look is Sullivans Dam. I was there earlier in the week with my fishing class, and although it was rather cool and damp to start there were fish rising.

The rain drizzle eased off before dusk and there was little wind. Although there were some rises, which I guessed were to midge, I still fished a damsel fly nymph on the point and a midge pupa on the dropper. One of the class broke on a good fish on a damsel fly nymph, and I landed one on the same pattern.

I had a less successful outing on the Tokomairaro at the weekend, seeing only three rises. There were few flies on the water, which surprised me as the afternoon hatch is usually quite good in the spring. I hooked two of the rising fish on an unweighted hare’s ear nymph but both dropped off shortly after. There were also stoneflies hatching but I did not see any rises to them.

Overall, I counted the day as a success as I only lost one fly in the trees. 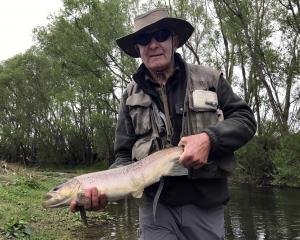