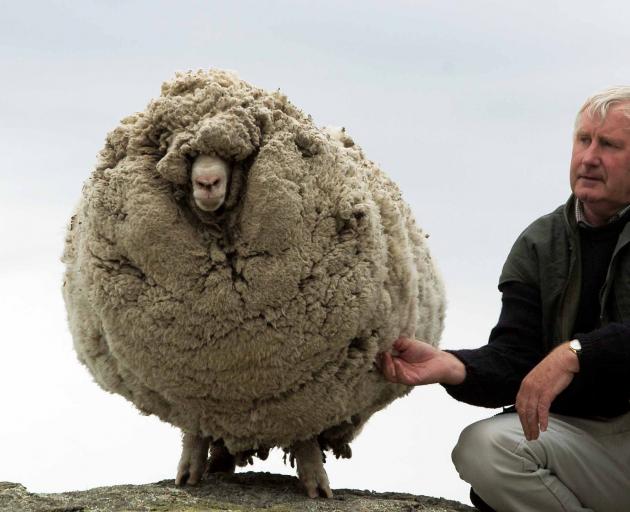 John Perriam, from Bendigo Station, after Shrek was discovered. PHOTO: OTAGO DAILY TIMES FILES
John Perriam is a man of vision, risk and "you can do it" approach.

Through his love for merino sheep and his home, Bendigo Station, he had "given it his all" and made a significant difference to the New Zealand merino industry.

That was his daughter Christina Grant reflecting on the pivotal role her father has played in the industry, during the Otago Merino Association’s awards evening on May 28.

She was presenting him with the Heather Perriam Memorial Trophy, named in memory of his late wife and her mother, and presented for outstanding service to the merino industry.

Mrs Grant, a Wanaka-based fashion designer who has forged her own career working with merino wool, said it was an honour to present the award to her father.

Not only was it in memory of her late mother, who had supported her father in his life’s work, but it was also special to be at Bendigo — at The Canyon, at Tarras Vineyards — to recognise and acknowledge his "outstanding contribution".

Mrs Grant said she loved growing up at Bendigo, seeing her father’s passion for "all things merino" and his thinking-out-of-the-box approach to everything.

What seemed impossible became possible due to his outlook and his big thinking showed no boundaries.

That passion for merino led the Perriams to establish The Merino Shop at Tarras, part of Mr Perriam’s vision of how to take the fibre to the people.

Thinking of his contribution to the merino industry, it was hard to go past the Merino New Zealand era, a company of which he was a pioneer.

What started with a small group of farmers determined to differentiate the premium fibre became a well-known brand.

Clever partnerships with luxury brands showed that merino was a premium product which deserved its place on the shelves of European boutiques.

She saw how much energy her father gave to the cause and his passion for the New Zealand merino story.

And "then came that sheep" — Shrek the woolly wether, who went on to global superstardom.

When most would "look the other way", Mr Perriam saw a marketing dream.

And while she and her mother would "sigh and roll their eyes" at times, Shrek raised a lot of money for Cure Kids and the merino brand was in the spotlight again.

It had been a career of highs and lows, dreams and aspirations, wins and losses, and tragedy, including the death of Mrs Perriam.

Mrs Grant thanked her father for setting audacious goals, saying he had changed the farming landscape in New Zealand.

Receiving the award, Mr Perriam said it was not about his late wife and himself, although Mrs Perriam was a big part of the industry too — it was about "you guys", indicating the growers at the function.

He was thrilled to see so many young people attending and was proud of how the Otago Merino Association had evolved from its inception about 30 years ago.

He recalled when the idea of the first Clip of the Year event was mooted and Wrightson wool manager, the late Buck Gloag, suggested holding it in the wool store in Dunedin, getting a red carpet and rolling it out.

But that was not good enough for Mr Jopp, who said it would have to be held in the town hall.

The inaugural event was such a successful occasion and it had "just rolled on and rolled on".

More than 40 years ago, Mr Perriam said he had the privilege of buying Bendigo and 6000 merino sheep from Dick Lucas.

The road that ran up from The Canyon to the high country was named the Burma Rd, by Mr Lucas, a nod to the road linking Burma (now Myanmar) with southwest China, and it was not easy.

To see The Canyon here now was fantastic, he said.