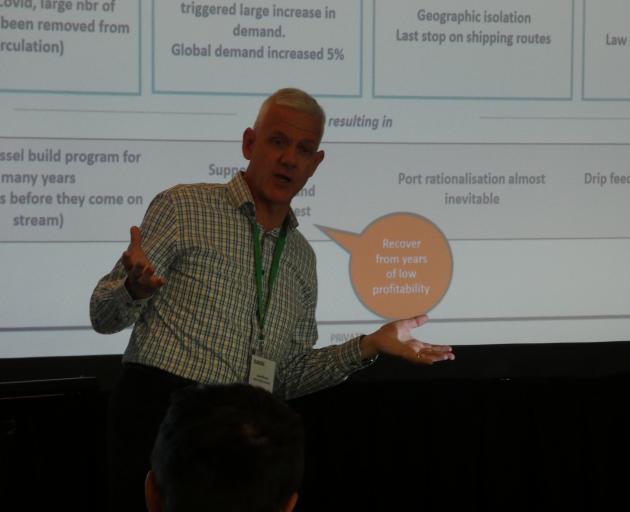 BNZ head of exports Jason Reeves sees some trading highlights with a lower exchange rate and high demand combining with downsides over the next two years. He spoke at the Grain and Pulses Forum in Christchurch. PHOTO: TIM CRONSHAW
A weakening dollar and high demand are the bright points for primary exporters struggling with shipping, inflation and other woes.

Arable producers and plant breeders were told by a Bank of New Zealand expert at the Grain and Pulses Forum in Christchurch to expect little respite from some of their exporting challenges over the next 18 months.

BNZ head of exports Jason Reeves said trade prospects varied widely and supply chain disruptions were unlikely to change in the near future.

Shipping had been largely an unprofitable industry before Covid-19 and a surplus of ships were decommissioned when demand for international trading vessels picked up about 5%.

That created a bottleneck and a large ship building movement under way would take 18 months to two years before vessels were on the water.

"Our geographic isolation as the last dock on the line on shipping routes has also made our position even more acute."

Some shipping companies previously going to New Zealand had gone to the west coast of the United States or the east coast of China because of better returns.

"Over the next 18 months that should sort itself out, but there will still be a reduction of vessels coming to this part of the world."

Mr Reeves said he would not be surprised if there were discussions about some port rationalisation in New Zealand over the next two to five years.

Talks of an Australian super port on the east coast — perhaps three to five years away — might see goods dropped off before being shipped to New Zealand.

He said that would act as a mitigation strategy to improve the chance of more regular scheduled visits.

"The current level for pricing is, as we all know, eye-watering and every week you get a new schedule by a shipping company with the price going up.

"That will pass in time, but it’s unlikely to go back to the previous days we were in three, four and five years ago. So businesses budgeting post the current impasse should factor into their consideration making 10%, 15%, 20% more in shipping rates moving forward."

Export businesses would be feeling inflationary pressure, but that was a global phenomenon.

"It’s not just New Zealand and you could argue that New Zealand has been a bit earlier than most and — to use a term — has gone hard and gone early, so I think we have done relatively well in that aspect to try to address inflationary pressures perhaps earlier than other jurisdictions around the world."

While the pain was more immediate, we should be in a better position to come out of it earlier than some of our competitors, he said.

New Zealand sat "mid-table" on inflation levels compared with other countries such as the United States, on 8.6%.

Also in exporters’ favour was that customer demand remained strong even among price-sensitive markets.

"The one saving grace for New Zealand is our production — grain, pasture — is in very high demand globally and we haven’t seen any signals yet of that really coming off," Mr Reeves said.

He said the almost zero unemployment was unlikely to be addressed in the near future and retaining talent would be challenging for all industries.

In the agri-tech space there were enormous opportunities as the US was having to turn to technology after turning the tap off for cheap labour from Mexico.

"The positive aspect for the export sector is we are seeing in the long-term trend of the dollar depreciating which is excellent for our exports.

"We think that trend is going to continue for a wee while so that’s also going to put you in that sweet spot in terms of high demand offshore and favourable exchange rate despite the [increased cost of] imported raw materials, increased labour rates and the increase in regulation."

Trade deals with the United Kingdom and the European Union would be positive for the bottom line of exporters, he said.