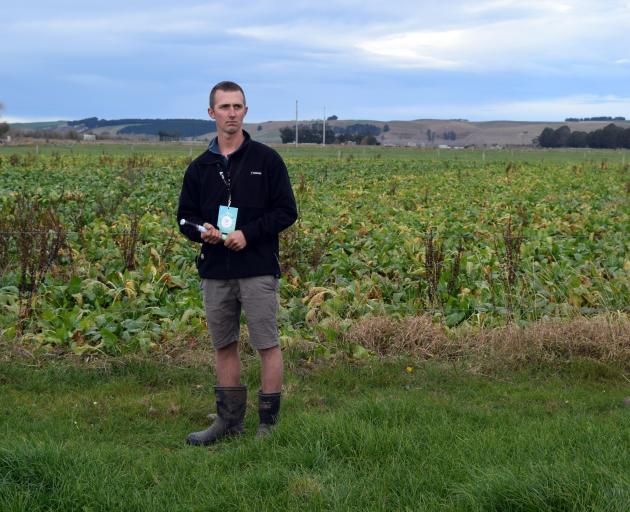 Papakaio Dairies owner Peter Smit speaks about his fodder beet crop at a South Island Dairy Event workshop on his farm in North Otago. PHOTO: SHAWN MCAVINUE
Fodder beet is the winter crop of choice for North Otago dairy farmer Peter Smit but an agronomist warns of a proposed law change which could limit the amount of it a farmer can feed out.

His cows graze on the fodder beet between April and August.

About 500 milking cows eat about 4kg of the crop each day in April and May.

The cows are dried off at the end of May and about 300 of the herd on the crop are moved to a 110ha dryland block up the road for winter.

About 200 of the early calvers remain in the paddock eating fodder beet through winter.

"Those early calvers are the ones we really need to pump the feed into."

The early calvers had now been fully transitioned on the crop and ate about 9kg of fodder beet a day.

Fertiliser on the crop includes 100kg of urea per ha in December last year and effluent spread from a pivot irrigator.

The stoney soil the crop was in helped minimise pugging.

The plan was for the 200 cows on the crop to calve between July 28 and August 5, so they needed to transition off the crop from mid-July and be in a grass paddock by July 20.

The cows were also fed baleage during winter.

"These girls are calving on July 28, so they don’t have long to put on weight."

After winter, he expected about 1.5ha of crop to remain, which would be eaten by the milking cows in August.

Catalyst Performance Agronomy senior agronomist Sam Sturgess, of Oamaru, said under proposed changes to the code of welfare for dairy cattle fodder beet could not make up more than 60% of the diet of dry cows and growing cattle and no more than 30% in lactating cows, with the remaining feed provided through supplementary feed and/or pasture.

If a cow’s diet could only be 60% fodder beet then farmers needed to be aware of a crop’s amount of bulb and leaf because its ratio dictated how it performed.

Big users of fodder beet needed to be mindful of the proposed welfare changes.

Consultation on the proposal closes on June 30.

Mr Sturgess also suggested farmers follow the research about fodder beet possibly being an environmentally friendly crop because its root system could grow to 1.5m long in 75 days and capture nitrates in the soil deeper than other crops.