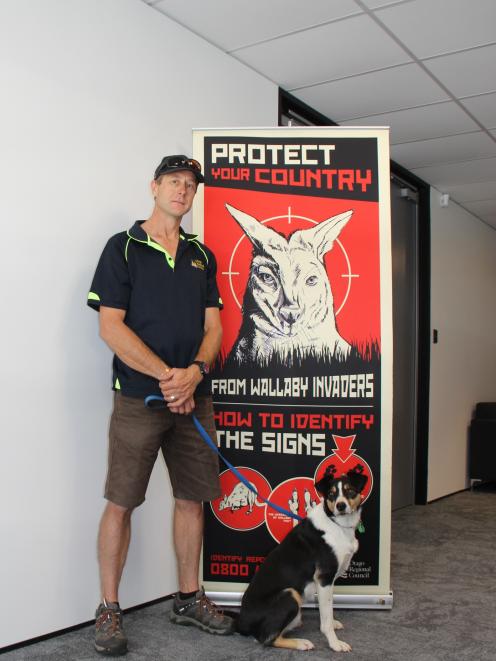 Q How many wallabies were destroyed around Ranfurly last year? Have there been any more shot or sighted in the region this year?

A. Five wallabies were found destroyed following poison operations, and three were shot in the Ranfurly area last year.

We have had multiple sightings between Naseby and Ranfurly reported since then.

One wallaby was found dead on poison lines on the Waitaki River bank near Oamaru last year, and we suspect we destroyed more animals that were lost in heavy cover. Another was destroyed by the public in the same area.

Wallabies have been seen on the Kakanui Mountains and on SH83 near Oamaru this year. One wallaby was found dead near the Lindis River bridge near Tarras, and may have been roadkill.

Q Have there been any surveys carried out to establish numbers? Have numbers increased significantly this year?

A. ORC staff with trained wallaby detection dogs, as well as contractors, have continued searching suitablehabitats among thousands of hectares around the Maniototo, Kakanui Mountains, North Otago coast and Tarras areas.

Environment Canterbury (ECan) is continuing to employ search and destroy teams to cover likely wallaby habitats on the south bank of the Waitaki River.

Q Do you know how successful the poisoning operation has been?

A. The areas controlled with poison have been monitored and no evidence of remaining wallabies has been found in those specific locations; it appears that the poison control methods have been very successful.

Trained wallaby detection dogs are an important tool for monitoring. They have helped, for example, to locate an outlying wallaby while staff were following up on a poison operation.

The biggest challenge is locating wallabies in low numbers over vast tracts of Otago back-country.

We need to continue with programmed monitoring as the affected areas are extremely large and low numbers of wallabies can hide anywhere.

Poison operations will continue where necessary, and these could be anywhere wallabies are located and poisoning is considered the appropriate method for the situation.

Q Are there any new tools or weapons expected to be introduced in the control battle?

A. Highland Helicopters has imported the most advanced thermal imaging system in the country. ECan has arranged for a trial utilising Highland Helicopters to detect wallabies in low numbers and, if successful, ORC and ECan will investigate the potential for joint ventures in the future.

Landcare Research (with a sustainable farming fund grant and supported by ORC and ECan) has been working on trials to determine the precision of our current wallaby detection tools, comparing dog and rifle, aerial thermal vision, helicopter search and camera traps.

Q Do you believe the battle against the wallabies is be able to be won?

A. The issue of wallabies moving to and establishing in Otago is very serious, and combating this issue will likely require significant resources and tools.

We simply do not know how many individual animals are already in the Otago back-country.

Given the current evidence, the chances of wallabies fully establishing themselves in Otago remains high, and it could already be happening.

Q Are you aware of any instances where people have released them or transported them into other areas in the past year or so?

A. We have not found evidence of humans moving wallabies into other areas in Otago, and it does not explain the trends we have seen here in recent years.

The movement of wallabies by people is a fineable offence that has been known to occur in Canterbury, and is likely to have occurred historically within other regions.

NB: Otago stakeholders should be concerned about the current situation, and must take all practicable steps to destroy any wallabies seen, if it is safe to do so and report sighting of wallabies - dead or alive - to the ORC. The wallaby sighting form can be found online at www.orc.govt.nz/managing-our-environment/biodiversity-and-pest-control/p....