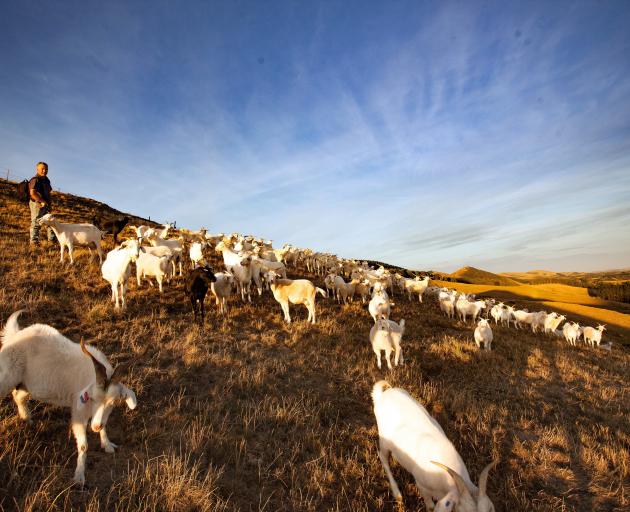 Clinton farmer David Shaw and his goats. Photo: Supplied
A kilogram of top grade, 14 micron cashmere goat fibre is worth $180 to the farmer.

As the top animals can produce up to 400g of fibre per year, the inclusion of cashmere goats in a sheep and beef operation is an attractive option, says goat farmer David Shaw.

The weed control is a bonus.

He and his wife Robyn are hosting a field day on their Hillfoot Road property near Clinton on August 24 from noon to 3pm for farmers interested in adding goats to their farm.

While there were about 250,000 dairy, fibre and feral goats nationally, they would like to see more farmers consider adding cashmore goats for fibre and meat.

''Our initial target is to have about 25,000 more cashmere goats [nationally] to supply the current orders,'' Mr Shaw said.

The couple run about 700 cashmere goats with their sheep and beef operation.

In addition to a discussion about fibre marketability and the high demand, there is to be a shearing demonstration.

''We are getting ready to start shearing them,'' Mr Shaw said.

''Cashmere is a little different from wool because if we don't collect it about now, it will get shedded as they lose their winter coat.''

The goats had two types of fibre: coarser outer guard hairs and a finer undercoat that is prized for its warmth and softness

''We shear but other countries will comb.

''Anyone who knows how to handle a handpiece can learn to shear a goat.''

One of the themes of the field day would be how cashmere goats could be integrated into a sheep and beef farming operation and farmers would be able to look at the animals up close.

''By adding goats you lift the farm's productivity and they are useful for weed control.''

He said they received good feedback.

''There was a lot of interest from farmers.''

After they finish shearing in the next couple of weeks, they will start kidding.

He said because of feral resilience, his goats are well adapted to the wetter climate.