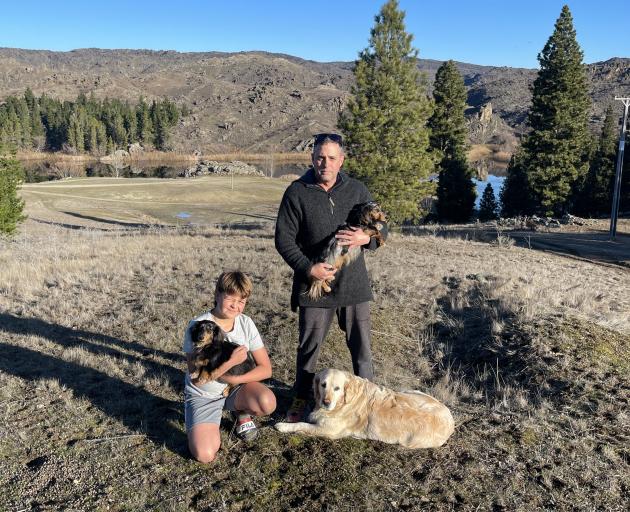 Enjoying some time at the Manorburn Recreation Reserve are (from left) Orry Orkibi (12), holding miniature dachshund Heidi, his father Hadar, holding miniature dachshund Lena, and golden retriever Meg. The Orkibi family’s dogs can enjoy the reserve — for now — after a poison drop was postponed. PHOTO: SUPPLIED
Hadar Orkibi has stymied a rabbit control operation using pindone at the Manorburn Recreation Reserve but insists he is "not a greenie".

Instead, he believed there should be an alternative to poisoning and requested in a letter to the Central Otago District Council the operation, which was scheduled to begin this week and run for about eight weeks, be postponed until that was investigated, the Galloway man said.

He also used social media to bolster support to have it postponed.

The council acquiesced and confirmed on Monday the operation had been postponed.

Council parks and recreation manager Gordon Bailey said concerns had been raised both directly with the council and on social media since advertisements were published last Thursday.

The council would postpone the planned programme while other options were investigated, he said

The council was served a notice by the Otago Regional Council requiring it to deal with the high number of rabbits at the Manorburn Recreation Reserve.

Pindone — an anti-coagulant which takes 10-20 days to kill a rabbit after it is ingested — was to be used.

In his letter to the council, Mr Orkibi said the reserve was one of the last areas where community members could walk their dogs all year round.

He hailed the postponement as "good news".

"It is good the council has taken on board the effect the poisoning programme would have on the community.

He hoped the poisoning option was "off the table".

"I hope a suitable alternative is found, such as shooting at night for the recreational reserve."

So how sad is it that being referred to as a 'Greenie' is a bad thing! Your average 'Greenie' supports the eradication of pests such as rabbits in the name of helping dwindling biodiversity...and still take your dog for a walk away from the poison drop for awhile...

'the dwindling biodiversity' is the result of 60 years of poison by the so called greenies who are not 'green' at all.

"Pindone — an anti-coagulant which takes 10-20 days to kill a rabbit after it is ingested" you happy for something to take 10-20 days to die after eating poison....