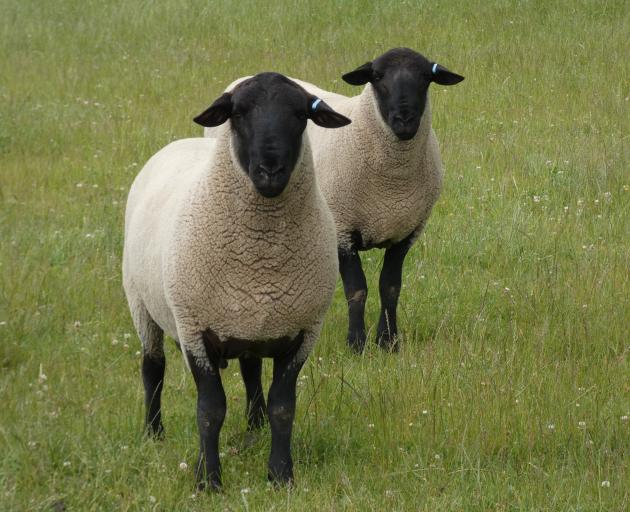 Suffolk stud rams. Photo: Tim Cronshaw
Eric Ross credits a "bit of luck" for selling a Suffolk ram from the Collie Hills stud at Hakataramea for $16,500 at the Canterbury A&P Association Elite Ram and Ewe Sale.

That was the top price for a ram at the Christchurch sale — and a record price for a Suffolk ram at auction and almost certainly the private market as well.

Mr Ross and stud co-owner Wade Newlands — his son-in-law — sold four Suffolk sires for an average of $7000 and were chuffed with setting a new standard for the breed.

Mr Ross said several bidders contributed to the luck factor as they drove up the price for the two-tooth.

"This is a top ram and two or three people were keen. Annabel Tripp wanted him and came down to see him and all the rams. He’s right up there with the best we’ve produced. He’s got meat and is a very sound ram with great presence and was our top ram on SIL and our top-scanning ram."

They didn’t keep him themselves because they had a lot of genetics from him and his sire, Hillside 16-17, which they had bought from Nelson’s Malcolm Irvine, he said.

The money would be reinvested into the stud and used to pay a few bills, he said.

The previous best of $15,000 for the breed was held by James Gardiner from Pinegrove Suffolk Stud near Amberley.

They paid $5500 for a Suffolk this year from Andrew Adams of Stoneylea Suffolk Stud at Greendale.

Mr Ross said there more inquiries for Suffolks as flock rams as they were a much-improved breed over the past 10 years with more "guts and shifting ability" and more meat on their frames.

The pair usually sell about 160 Suffolk rams and 130 to 140 Corriedales a year and have nearly reached that target this season.

A catalogue of about 130 stud rams, including seven Texel and six Poll Dorset two-tooth ewes, went under the hammer at the elite fair.