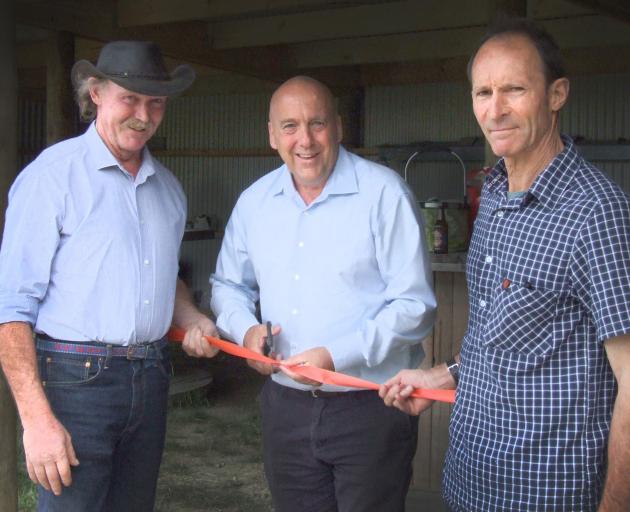 It was only due to the tenacity of a couple of club members that it kept functioning and now, it has undergone a remarkable change in fortunes.

The club — now known as the Omakau-Earnscleugh Collie Club — is preparing to host the South Island sheep dog trial championships in 2021.

It will bring an influx of about 500 dog triallists into the Alexandra area for five and a-half days.

It is a huge undertaking for the club, which has transformed bare land on Earnscleugh Station into a venue capable of hosting such an event.

Mr Cadogan said such an initiative was the "backbone of Central Otago" — "getting together and making things happen" — and he congratulated the club for its efforts.

The club’s trials were first held at Earnscleugh Station in 2016. Before that, the club was based in the Waikerikeri Valley for the previous decade or so and, before that, it was at Chatto Creek.

Alistair Campbell is looking forward to the 2021 South Island sheep dog trial championships being held on his property.
With different landowners in the valley, it was becoming difficult to hold the event and the club jumped at the opportunity when the Campbell family offered to host the trials on Earnscleugh.

The cost of the shift — including tracks and building pens,  yards and  clubrooms — was estimated at about $100,000.Club president Elliott Heckler, who will steer the club through to the championships, said it was a big task ahead but it was a good challenge and he was looking forward to it.

Vice-president Paul McCarthy was the driver behind the fundraising and a winter feed competition was the main event.

It raised $145,000 in two years, some of which was also given to various community groups, and the Otago Community Trust and Pub Charity also contributed.

The club’s aim was always to run a bigger event than just the club trial and hosting the South Island championships was "a big dream" — "but we actually got there", Mr McCarthy said.

It would be a great event for the wider district and plenty of support would be needed from the townsfolk as well as the rural community.It was also a milestone for the club to be able to open its clubrooms.

"Collectively ...  we should be bloody proud of what we’ve achieved. It’s a great day," he said.

Life member Bill Hinchey said the venue ticked three major boxes when it came to the requirements to run an island event — a willing landowner, "all the sheep you could ever want", and plenty of accommodation in close proximity.

While club members were effusive in their praise for the Campbell family, Alistair Campbell downplayed their major contribution.

"It’s my son [Duncan] and my sport. You always look after your own sport," he said.

Hopefully, it would be the "last shift" for the club and he was thrilled with the result of all the hard work.

Asked whether he had any rising stars to qualify for the South Island championships when it was held on his home turf, Mr Campbell quipped "I’m hoping the old ones can hang on — and me".