Most rivers and streams are above summer level at the moment, but that is not necessarily a bad thing from the fishing point of view.

Water temperatures have been lower due to flushes of cooler water after regular rainfall. In the cooler water, fish will remain active throughout the day and will also recover more quickly when returned by anglers who practise catch and release.

The optimum temperature range for trout feeding is between 14degC and 18degC and waters have been within that range most of the time this summer.

The regular rises in river levels accompanied by water colouring up is better for spin fishers and it also helps fly-fishers hide their mistakes. The surface of the water being ruffled by the wind can make it easier to deceive fish too. Fly-fishers often put off fishing if it is windy, but they miss out on an opportunity to catch fish.

The only river that is not at a good level for fishing is the Clutha, but it should be worth trying between generation peaks on the lower river. Fishing it in the evening can be productive when sedges hatch and trout rise to them.

I am surprised at how few anglers I see when I am out on my regular fishing trips. The only place I have seen a few anglers is Mathias Dam and I saw an angler tackling up on the Pomahaka as I drove past this week. We have such a wealth of fishing in Otago that anglers are well spread out and do not get in the way of each other.

That trip to the Pomahaka was a hard day’s fishing. It was cool and drizzly with a bit of a breeze, which made it feel even cooler.

I found the odd fish rising to either willow grub or mayflies. The willow grub feeders were beneath the willows, of course, and those taking mayfly duns or emergers were out in the open water. I managed to hook a few but lost four of them before landing my first fish.

I explored all the out-of-the-way places, which involved a lot of bush-bashing and climbing up and down steep banks. At one point I spotted a fish off a high bank and debated casting at it due to the lack of a spot to get it out.

Since fish were hard to come by, I put the nymph to it and it took straight off. I played it to a standstill then slid down about 3m into the water, netted it and returned it and then searched for a way to get back up the bank. With the aid of a tree and much exertion I managed to get out of the water and to the top of the bank.

After a cup of tea, I moved to somewhere easier to fish and in the last hour caught as many fish as in the rest of the day. 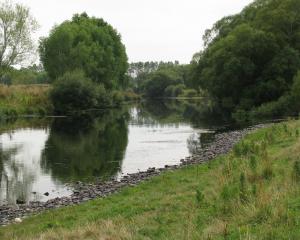