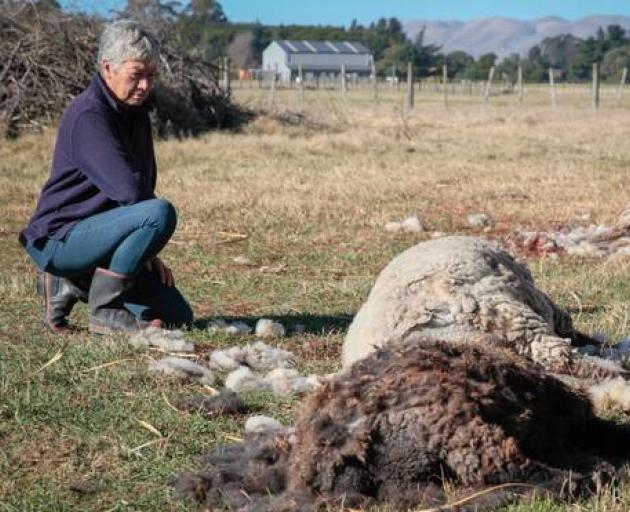 Roz Rowe sits near her sheep which were killed in a dog attack which took place Saturday night or in the early hours of Sunday morning. Photo: Warren Buckland.

Up to 46 sheep have been killed in a frenzy of dog attacks that have struck Bridge Pa.

Colin Davis had 32 of his sheep put to grazing at the Hawke's Bay Equestrian Park killed in the attacks on Monday morning, with another six still to be accounted for but believed to be dead by the owners.

"It's just a gut wrenching thing to see," Davis said.

One Bridge Pa local managed to spot two dogs after fleeing her property having killed two of her sheep and attacking her horse early on Monday morning.

Roz Rowe grazed her five sheep and goat on land belonging to Matt and Sue Dixon who contacted her on Sunday morning with news of the horrific attacks.

Her goat managed to survive, most likely fending off the roaming dog(s) with her horns, but has suffered a deep wound to her throat and now won't leave Rowe's side.

"I think she's been pretty traumatised by the whole thing, she's just following me around like a puppy.

"Sue [landowner] went out on Sunday morning to walk her dogs down the paddock and found the carcasses.

"The dogs must have gone home with a lot of blood around their muzzles because the sheep were very badly mutilated, there was a lot of blood. Someone will know their dogs have been up to no good."

Rowe said she hoped the owners, whoever they may be, take responsibility for their dogs as they had caused devastation and loss to her.

"Any owner who lets their dog roam should come and see the absolute carnage that their dogs do - I don't think they can imagine the mess that has to be cleaned up. They were innocent sheep, they were just grazing and minding their own business and they did not deserve this."

Landowner Sue Dixon said Hawke's Bay had a "major problem" with roaming dogs and action needed to be taken.

"I think more than one dog was responsible for this attack and it's just horrific. We've been on this land for 22 years and we've never had any problems like this.

"A lovely guy from down the road brought his digger down to help us bury the sheep and he also lost his little dog to a dog attack not long ago, so I'm guessing it's the same ones."

Dixon said she's nervous to even walk her two Jack Russells on her own land for fear that they will be attacked.

"Something needs to be done, there needs to be far stricter laws on what happens to people who own roaming dogs.

"There's no way these owners won't know what their dogs have been up to because there will be blood for Africa."

Dixon said dog attacks were becoming more frequent across the region and something needed to be done.

"These dogs killed all six sheep, and it seemed to be quite systematic because they were all lying pretty close to each other. The council just needs to pull their finger out and do something about this. The way these sheep died would have been absolutely horrific."

The attack has been added to an ever increasing list, after teenager Emily Kelly-Lowe, 15, was pinned against a fence, and bitten, by a roaming dog that weighed more than her.

A Napier nurse also received serious injuries in March this year while paying a home visit to a patient in Hastings and was attacked by a dog on the property.

Two children were also attacked 20 minutes apart by a dog in Moerewa in the Far North last week.

Looks to me as if local territorial authorities are not up to the task of dog control and this duty should be passed to the police.