Scientific approach to soil and water 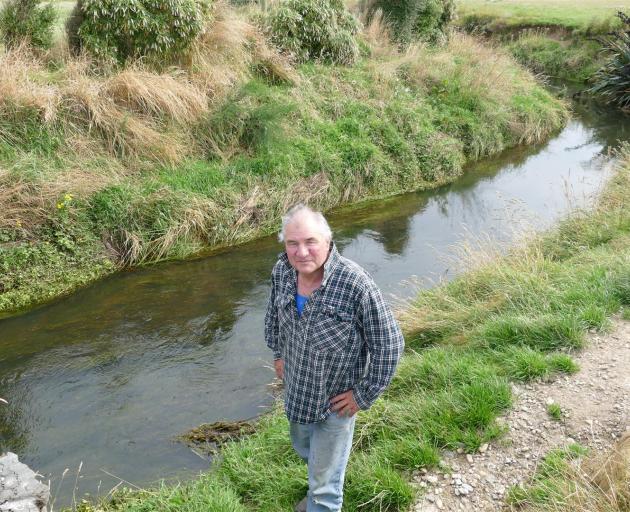 Ray McCrostie stands by the Waituna Stream which runs through his property. Photo: Ken Muir
''From data to dags'' is Waituna farmer Ray McCrostie's motto.

Despite all his old-school approaches, gleaned from 50 years' farming in the district, he has taken a very scientific approach to managing the health of his soil and looking after the quality of water on his property.

''The soil is the engine room that drives all our production and water is the blood that flows through that soil, so it makes sense to manage both of them the best we can,'' Mr McCrostie said.

The scientific approach to soil and water began some years ago when he began testing the water flowing from a single pipe on his sheep and beef farm into the Waituna Stream.

His dairy farmer neighbour also tested his water at the same time to provide a point of comparison.

''We tested three times - before, during and after a crop - and found very little difference in water quality between the two farms,'' he said.

''The testing provided an overview of what was in the water and allowed us to speculate on some of the reasons for the results.''

Mr McCrostie said he was able to take it from there and begin to apply his local knowledge with a view to improving soil health.

''The first thing to note was that all the water on both properties was within the standards for New Zealand drinking water,'' he said.

''We also noted that the soil changed as it attempted to respond to organic pressure with changes in the chemical reactions taking place.''

In effect, the soil was compensating for the punishment it was being subjected to, he said.

From there it was a matter of looking at the results and working back from that point.

''Our approach is to focus on soil health and microbial action which has meant focusing on things such as the sources of carbon being applied to the land.''

The results of the testing and follow-up had reinforced his confidence in his farming system and on-farm practices and the results had been reflected in improved animal health.

''It's been a challenge to expose our results and approach to other farmers.

''When I first presented them to the community there was not a lot of interest.''

An issue was it was often difficult to achieve a handover of knowledge when faced with the individualism of many farmers.

''The arrival of dairying has seen many changes in the district and on occasions I feel like a bit of a stranger in my own area.''

Mr McCrostie's property is close to the Waituna wetlands which are the focus of a strategy and action plan to preserve the Waituna Lagoon and he has been involved in this process on behalf of the local community.

''It's a challenging time for locals and already the focus on our local environment has impacted on things such as land values,'' he said.

''Hopefully, it is something that we can work through and achieve a result that supports environmental objectives and our community.''