Special occasion for fans of hunt

By Sally Rae
0 Comments
He might be ''just a little'' over 80 but evergreen Central Otago Hunt master Glynne Smith is showing no signs of slowing down.

Yesterday, Mr Smith was galloping across farmland near Moa Creek, in the Ida Valley, filling the position he has held for the past 30 years.

As master, he was ultimately responsible for the running of the hunt day, and yesterday's was particularly special for him.

The genial Mr Smith felt at home in the rugged Central Otago landscape, and he described it as a privilege to share it with the 190 riders who had come from as far afield as Northland.

He was one of the founding members of the Central Otago Hunt - its inaugural meeting was held at his and wife Lynley's home in July 1988 - and he has been master since its inception.

He was told the youngest hunt in New Zealand - by more than 100 years - would be ''history'' in its second season.

However, that had been proven wrong. The club had between 70 and 80 active riding members, including life members.

Asked for the secret to his longevity in the saddle, Mr Smith, who lives at Ranfurly, said he was ''just keeping on, keeping on''.

''Getting on a young horse every so often jolts a bit of your complacency,'' he said, laughing. 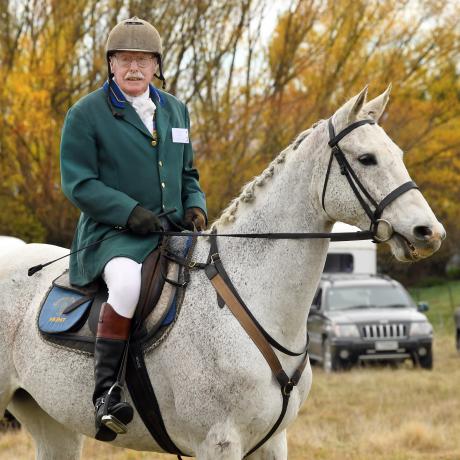 Glynne Smith, riding Jim, has been hunt master for 30 years.
One concession to age was the use of a neck strap and he also admitted that he ''might be a bit more choosy'' when selecting his path.

As he saddled his horse, Jim - ''a born spook ... I'm used to it'' - Mr Smith said he enjoyed the fellowship of the sport. Another great delight was the ''cheerful uncertainty'' of watching the hounds work.

Mr Smith praised the landowners who allowed the club to hunt on their property. Yesterday, the riders were hunting on about 1200ha of the Small family's 9500ha property.

After partaking of the traditional stirrup cup, the riders were piped on to the hunt field by Kyeburn farmer Jock Scott.