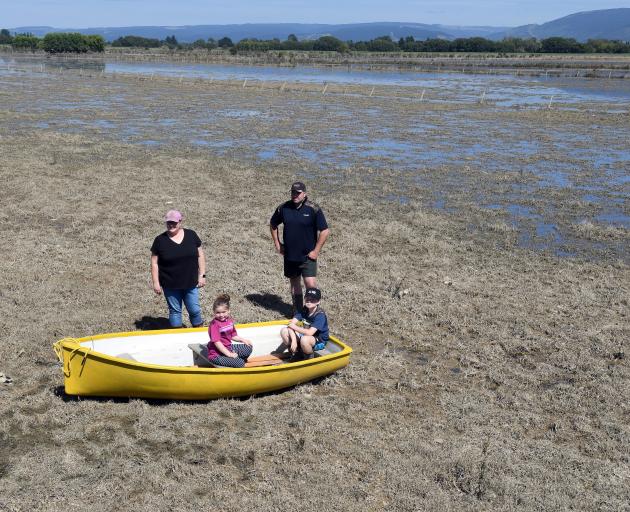 Dairy farm manager Dale Harris (right) and family members (from left) Jaclyn, Lexi (6) and Lane (8) try to make light of the situation, after their lush summer pastures were killed by flooding last week. PHOTO: STEPHEN JAQUIERY
In an odd twist of fate, nearly 100ha of an Otokia dairy farm now looks like a little piece of the drought-stricken Australian Outback — not because of a lack of water, but because there has been too much of it.

Farm owner James Adam said recent flooding on the Taieri left many of his paddocks under water.

Then, as the water receded and dropped to about 10cm deep, the hot sunny weather arrived and started boiling the grass.

"When you get a hot day, it cooks it.

"It’s all dead and pretty smelly now. It’s all rotten.

"It looks like the Outback in Australia in the middle of summer."

While it was devastating to look at, he was used to working under Mother Nature’s whim, and said he was well prepared for such events.

"It’s hard to make a sad story out of something that we’ve always dealt with. It’s where we live.

"You can get a flood here any month of the year, and occasionally this happens."

Mr Adam said he planned to start resowing the grass on about 98ha next week.

But in the meantime, he was feeding his stock a mixture of palm kernel, distillers grain, silage and some fresh-cut grass that was donated by a local contractor.

"That should last until the grass grows back."