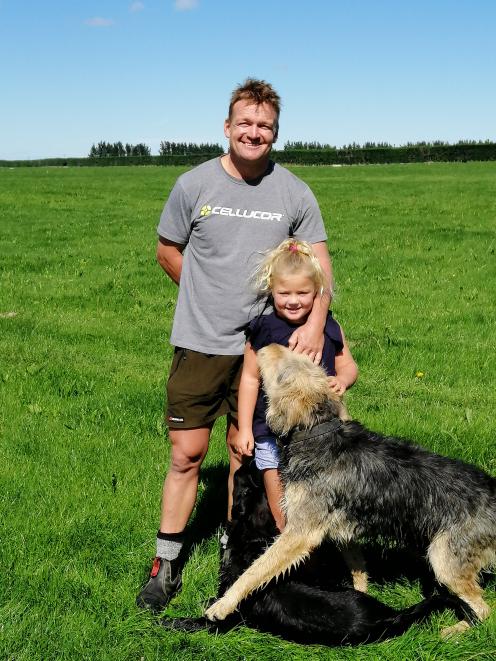 Eyrewell farmer Mike Smith hopes to pass his farm on to one of his daughters. He is pictured with his youngest daughter Millie (6) and dogs Ted and Blackie. Photo: Gina McKenzie
Making informed decisions using technology has created more productive land use for farms while reducing their environmental impact, according to Eyrewell farmer Mike Smith.

When Mr Smith and his family began their farming partnership in 2010, one of the first tasks was to boost soil fertility, along with adding soil moisture monitors, soil temperature monitors and flow meters.

''We wanted to know where we were sitting with our soil types, soil fertility and soil moisture-holding capabilities to make really well-informed decisions,'' he said.

''A lot of farms were only testing selected blocks of land, but we decided to test every single paddock individually to get the best results.''

As a result, Mr Smith noticed that the side of the farm where effluent was being spread had much more organic matter and better water-holding qualities.

He then added an irrigation system to the other side of the farm to improve soil quality.

''With our individual approach to soil testing, each paddock gets exactly what's needed and that's better for the bottom line and the environment.

''It's much more common now. Why would you apply excess fertiliser when you don't need it?

Having accurate information is vital for Mr Smith, who said advances in technology had revolutionised farming.

''Any time of the day I can check exactly what's happening on my farms using an app on my phone.

''We can break everything down into small details to build up an exact picture of what's happening.''

Mr Smith said he believed the general public was not aware of how accurate modern technology was, particularly when it came to irrigation.

He said he saw this as contributing to the rural-urban divide, but believed positive interactions could help people to reach common ground.

''A few weeks ago, I saw a woman taking photos of an irrigator running on a rainy day. I stopped and had a chat to her.

''She thought the irrigator shouldn't be running because it was raining. I whipped out my phone and was able to show her the soil moisture levels in real time so she could see why the irrigation was running.

''She said she had no idea that we were using that level of technology. Let's show people the facts and share what's really happening on farms.''

Mr Smith said he had a favourable view of Farm Environment Plans and the audit process which helped him fine-tune on-farm processes.

''For us, it was a matter of making some small tweaks and doing more record-keeping. It's important to be constantly improving and we've really stepped up our technology so we can prove that every irrigation event is justified.

''We've also got a great relationship with WIL [Waimakariri Irrigation Ltd]. It's really important to stay involved and to work closely together because we put a lot of trust in each other.''