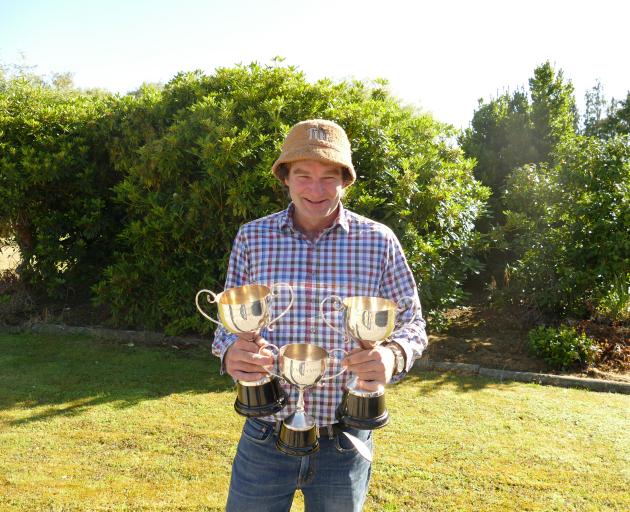 Blair Robertson displays his Romney trophies. Photos: Ken Muir
It's a case of back to the future for Gore A&P Supreme Champion Romney and Supreme Southdown winners Bruce and Sally Robertson from Waikoikoi.

''The Romney and the Southdown were the mainstay of the New Zealand sheep flock for many years, but a decline in the quality of the breed and a failure to improve saw them fall out of favour,'' Mr Robertson said.

''Improved genetics and better selection have changed all this.''

The Robertsons' Merrydowns Romney and Southdown Stud took the Supreme Champion Romney prize as well as the Supreme Southdown prize at the Gore Show.

Mr Robertson said the modern Romney had not only improved its meat characteristics but also provided more wool than many other breeds. 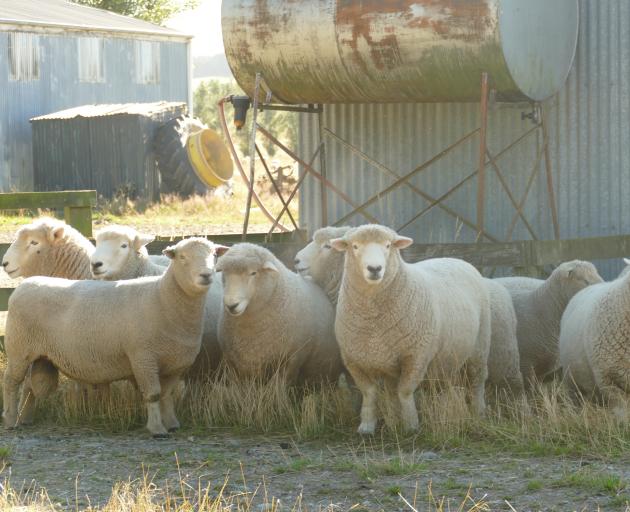 Some of the Merrydowns Romney rams with one of the Southdown rams front left.
''At a time when the wool price is very low it's an advantage to have a higher wool production when harvesting costs are rising,'' Mr Robertson said.

Mr Robertson said there were a lot of reasons for the change in acceptable characteristics for New Zealand sheep and it was not always the fault of the farmer.

''Pasture quality and genetics have improved dramatically from times where the hardiness of the breed and ease of management were often the most important characteristics,'' Mr Robertson said.

Each year Mr Robertson puts about 750 to 800 Southdown ewes to ram as well as 1200 to 1400 Romney ewes and both breeds reflect the modern trends.

''The Romneys are shorter and have good open faces and the Southdowns are meatier than the older, long slabbier type of animal,'' he said.

''The top Romneys are showing as much strength in eye muscle scanning as many of the newer terminal sires.''

Mr Robertson had his own flock when he was younger and through the years maintained a commercial focus on his flocks and this has fed into his approach to judging.

''One thing I believe is important is that the animals are hardy and can function in large mobs,'' he said.

''We've been ruthless in culling the lesser performers.''

He said animals that perform under those conditions are the ones his commercial clients want.

Mr Robertson one of the advantages of both the Romneys and the Southdowns is that it was relatively straight forward for breeders to change the animals in ways they deemed desirable, although of course, that took time.

The Robertsons operate on their own 240ha farm and also lease a nearby 160ha property. Mr Robertson said the leased property is a tougher land and again this helps reinforce the hardier characteristics of his flocks.

While he is happier with the level of wool production within his Romney flock, Mr Robertson is not so delighted with the state of the wool sector and the market for wool.

''The product is being used for an increasing number of products such as surf boards and bench tops as well as in insulation, but continues to lack profile in the market,'' he said.

''We need to follow the example of dairying and educate children in the schools about wool and press government and industry to get behind what is a unique natural product.''