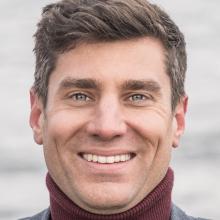 It has appointed Dr Davey as its first chief executive as part of an initiative to carry the momentum of Walk On’s initial domestic success into international markets.

His role was  to commercialise the product and launch into offshore markets.

He joined Walk On from Confitex, where he was responsible for raising capital, increasing revenue and developing international market access for the company as its co-founder and chief executive.

Confitex produces absorbent underwear for men and women experiencing light bladder leakage and a big part of it involved breaking down "taboos and stigmas" that surrounded the issue, he said. During his five years with the business, he launched the product into eight export markets and negotiated agreements with distributors and re-sellers in the United States, United Kingdom and Korea.

In the US, he launched it on HSN (Home Shopping Network), the largest television shopping network in the world.

When the opportunity arose to join Walk On,  it was too good to pass up, Dr Davey said. The world was looking for sustainable solutions.

The blister protection market had not had much disruption as it was dominated by  multi-nationals and  traditional brands that had kept doing the same thing.

It was an exciting opportunity to disrupt an otherwise fairly standard, "boring" market segment and it was great to see the passion that Mr Smith, a former mountain guide, had for the product.

Mr Smith had been in the United States on and off for the past six months working on research and development and product testing.

That included a huge endurance race in Alaska, where he was stationed in a  remote town that was a checkpoint along the journey.

Those taking part had been provided with Walk On products and had given "absolutely resounding" good feedback, Dr Davey said.

While previously aware of some of the qualities of merino wool, he had not quite fully appreciated the extent of them.

When feet were in boots for an extended period of time,  having a synthetic layer covering a blister could lead to infection, whereas a wool product allowed the skin to breathe.

While Walk On used only small quantities of merino wool, it was a value-added premium product and the more companies like Walk On that could find a use for merino, the better off merino farmers would be, he said.