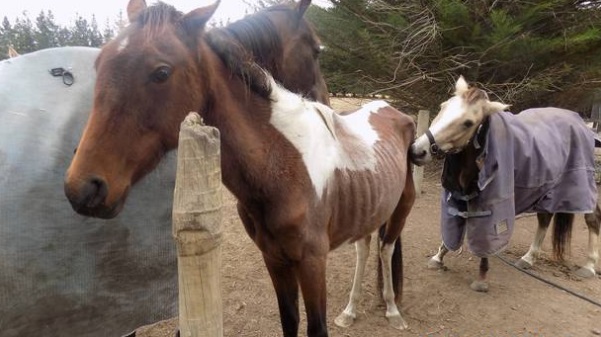 SPCA Inspectors found several of Lisa Corfield's horses in an emaciated condition. Photo: Supplied via NZ Herald
A Christchurch woman has been prosecuted by the SPCA for ill-treating four of her horses.

She was sentenced to 250 hours’ community work and ordered to pay $300 towards legal costs and $7046.08 in reparations at the Christchurch District Court.

Seven of her horses currently in SPCA custody have been forfeited to the SPCA and she is disqualified from owning horses for 10 years.

Two horses died when they were taken into SPCA care.

SPCA Inspectors responded to an animal welfare complaint about nine horses belonging to Corfield in March 2017.

They found the grass in the horses’ paddocks to be so low that there was no grazeable grass, with faeces covering 30 per cent of the grass surface, a SPCA spokesperson said.

The inspectors found four of the nine horses were emaciated and two in a thin condition, with no evidence of additional feed supply at the paddocks.

SPCA seized all nine horses after receiving no contact from Corfield in response to a notice requesting urgent contact.

Four of the horses - Karma, Sophie, Angel and Diamond were found to be extremely emaciated by a veterinarian, who said reaching this body condition would’ve taken many weeks in an otherwise healthy animal, and the weight loss would’ve been obvious during this time.

“Due to the chronicity of this weight loss, the horses would have prolonged physical and mental suffering,” an SPCA spokesperson said.

One of the horses, Karma, had to be euthanised two days after she was taken into SPCA care.

Despite treatment and attempts to lift her, she was too weak to stand. Karma was suffering from “refeeding syndrome”, a condition seen in the 3-7 days a severely emaciated animal begins to eat again.

“However, it was also possible that it was a result of severe emaciation,” an SPCA spokesperson said.

Five months later another of Corfield’s horses perished, even after intensive care from the SPCA.

Sophie was found dead in her stall, her death related to the starvation she had suffered.

“A post-mortem found that she had an underlying parasitic burden due to being starved and underweight, which made her immune systems more susceptible to parasitism, infection, and disease,” an SPCA spokesperson said.

But Corfield said that Karma and Sophie had only been leased to someone from mid-January 2017, and had only been back in her care for four days before the SPCA became involved.

She refused to tell the Inspectors who the horses had been leased to, saying it was a verbal agreement and that no contract had been signed, SPCA said.

Corfield said she checked the horses daily and was feeding out hay.

She acknowledged that she could have prevented the horses’ decline in condition by getting rid of some of them, and that she thought they didn’t have enough feed.

Corfield was already known to the SPCA, following a number of complaints and welfare issues dating back to 2013.

“These beautiful horses suffered for an intolerably long time, living with the mental and physical anguish of being starved,” she said.

“Looking after a horse or pony is a big responsibility as they have complex needs. They need high-fibre pasture to eat as an absolute minimum.”

The other horses were put under a veterinarian-led feeding plan, and gradually regained weight under the care of SPCA’s animals team.

They were then transferred to foster homes.

Foolish and selfish owner--does not deserve to have care of any animal.