Wool classer association members listen to Miles Anderson's update at the national meeting in Timaru. Photos: Chris Tobin
If the Government wants to build more houses with KiwiBuild, why not put New Zealand wool carpets in them, as well as in schools and hospitals?

''We're putting pressure on the Government with a few things,'' Mr Anderson said.

''Wool is safer and healthier.

''And if you can get a carbon credit for trees, why not wool? We've just had an announcement from the Government about the Zero Carbon Bill and their greenhouse gas target but a lot of things haven't been even considered by them.''

Mr Anderson said New Zealand First had a policy going into the 2017 general election calling for New Zealand wool carpets to be used in government offices and state houses and as the material of choice for insulation. 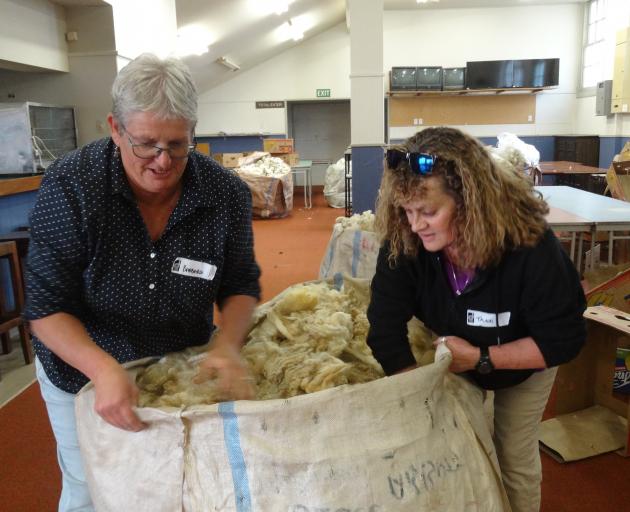 Wool classers Barbara Newton (left), of Dunedin, and Trudi Landreth of Whakatu, Hawke's Bay, load wool after a competition at the annual meeting.
Winston Peters said at the time the move would revitalise New Zealand's declining wool industry and make for better building.

''It is wrong that in the six years since January 2011, the Ministry for Social Development purchased no woollen carpets but thousands of square metres of synthetics,'' Mr Peters said.

Mr Peters' suggestion was debunked by ACT leader David Seymour, who said it was ''some kind of nutty attempt at 1970s-style protectionism.''

Then-Prime Minister and National Party leader Bill English was equally unenthusiastic, saying any number of industries would want a boost from a political guarantee that their product would be purchased.

Mr Anderson said since Mr Peters' announcement more than 18 months ago, ''no-one has been willing to stand up and commit to it.''

Mr Anderson provided an update on what has happened since Agriculture Minister Damien O'Connor hosted a wool summit last year which was aimed at lifting the industry out of a trough where farmers were saying that once wool shearing costs were deducted, they were lucky to break even financially with wool returns.

Mr O'Connor said wool had great potential as a sustainable and valuable product but the industry lacked unity, structure and strategic focus since deregulation in 1997 and an unsuccessful levy referendum in 2014.

After the summit, a working group was formed to identify problems and opportunities in the industry and to re-energise the industry, especially cross-breds.

Mr Anderson said MPI was collating information on where New Zealand wool ended up once it was exported.

''At the moment we don't know and without that information it's hard to plan.

''We have a lot of research material sitting on shelves that we need to put on a digital platform so we can utilise it.

''Over the last 20 to 30 years, a number of research projects have just been repeated.

''We also lack wool industry representation on trade delegations and we have a lack of consumer recognition of wool and all its qualities.

''People don't understand wool has fire resistance and other qualities; we need to tell the story to resonate with consumers.''

Mr Anderson said the working group would complete a blueprint by the end of the year.

Then the question would be asked how to finance future plans, which might require a wool levy.