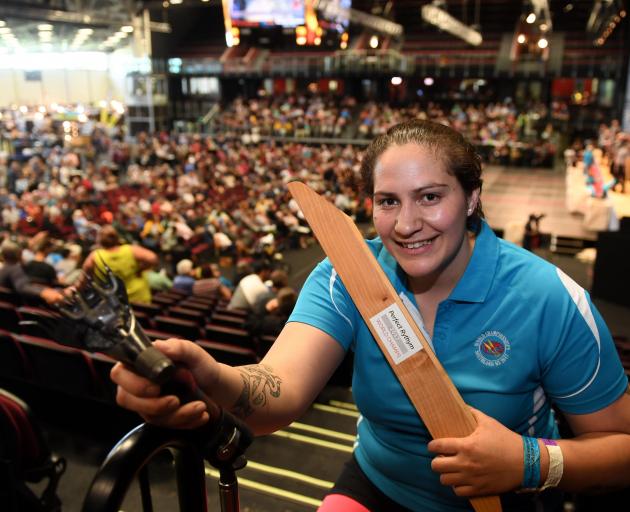 Pagan Karauria at last year's World Shearing and Woolhandling Championships in Invercargill. PHOTO: STEPHEN JAQUIERY
Pagan Karauria believes it is mental training that has helped her perform so well on the competitive woolhandling circuit this season.

Karauria (29) won the open woolhandling title at the Royal Easter Show in Auckland at the weekend, beating world champion Joel Henare who helped mentor her to the win.

The Alexandra shearer reached more finals than ever before this season, bouncing back from the disappointment of narrowly missing out on a place in the New Zealand team for last year's world championships in Invercargill.

Karauria was born into shearing royalty; her father Dion Morrell is a master shearer and world record-holder, while her mother Tina Rimene is a former world champion wool-handler.

She attributed her success this season to the mental training, mainly with her father and also some work she had done with Henare.

Beating Henare, originally from Gisborne and at present Motueka-based, did not happen very often.

Henare finished third at the Royal Easter Show and Monica Potae, from Milton, was runner-up.

The win was a boost for Karauria heading into this week's New Zealand championships in Te Kuiti which start today and end the season.

Her mind was very firmly on being selected for next year's World Shearing and Woolhandling Championships in France.

Despite missing the New Zealand team last year, she, remarkably, competed in both disciplines in the All Nations competition at the world championships, finishing second in the open wool-handling and sixth in the senior shearing.

Karauria had an added incentive when it came to next year's event; her grandfather came from France and she was keen to see first-hand where her roots were.

She acknowledged it was gutting to miss selection for last year's championships but she intended to put the work in to make next year's team.

She intended having a meal plan and gym plan, and wanted to "lose a lot of weight and get a lot fitter" so she was "good to go".

Karauria was a full-time shearer which helped her stay fit for woolhandling, she said.

It had also been credited for her recovery from a major back injury in a work van crash in 2008.

As far as encouraging other women to get into shearing, she said sheep were getting much bigger and the reality was that for women to shear, they had to be very strong and committed.

Karauria has been developing a woolhandling training business which had been show specific for about three years, and she was now starting to get into training in sheds.

She loved the training aspect of the industry, saying it was very rewarding to see the improvements.

Her big goal was to buy into the family shearing business and eventually take it over.

"I think I'll always be in the industry," she said.