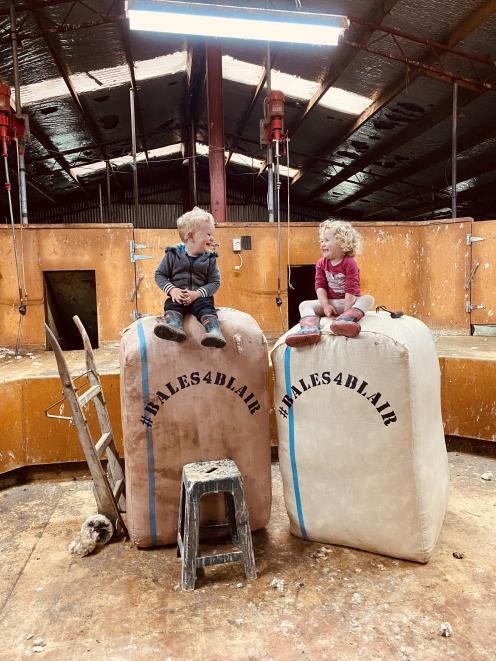 Cousins Jacob McRae and Tessa Cameron (both 2), of Mokoreta, sit on the top of wool bales. The bales are to be donated for the Bales4Blair campaign. PHOTO: BROOKE CAMERON
A conversation between three farming mums over tea earlier this year has led to the Bales4Blair fundraiser for the Southland Charity Hospital.

The hospital is being built in memory of Southlander Blair Vining who died from cancer in October last year.

The facility will provide healthcare for those living in the Southern District Health Board zone who would otherwise be unable to access treatment through the private or public systems.

While chatting over the dinner table to her farming friends Brooke Cameron, of Mokoreta, and Sarah Dooley, of Mimihau, Slopedown sheep farmer Amy Blaikie suggested asking farmers to donate bales of wool to make insulation and carpet for the hospital.

Mrs Dooley said that since that first discussion, the campaign had been supported by many players in the wool industry, including New Zealand Wool Scouring which offered to scour the bales of wool that will be made into insulation, the Federation of New Zealand Wool Merchants, shearers, wool brokers, wool classers and many farmers.

"Amy came to us with this idea and we liked it. It was awesome. We had no idea how it would go but we have had this huge support from people."

The campaign runs until January 31, but they had not set a target for the amount to be raised.

Bales not used as insulation would be auctioned.

The money raised would pay for the carpeting and anything left over would go to the hospital.

Farmers from throughout New Zealand can donate any full bales of wool (fleece or bellies and pieces) and it will be sorted into lines by New Zealand Wool Scouring.