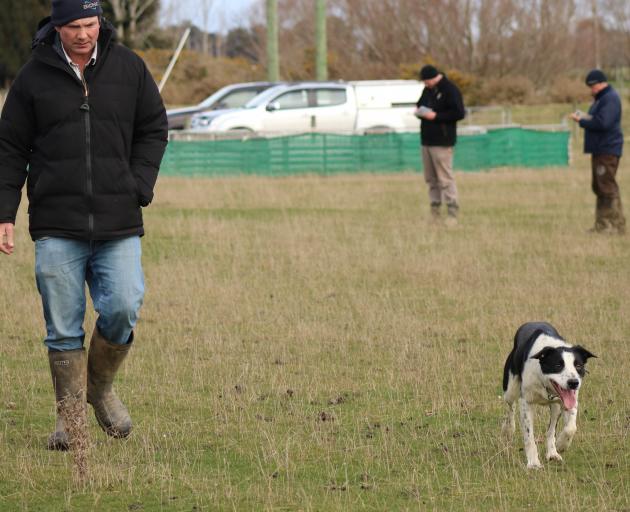 Heading dog Speck leads his former owner, Boyd Tisdall, of Outram, out of the paddock after going for the day’s top price of $6900 at the Gore dog sale last week. PHOTO: KAYLA HODGE
Who knew a black and white Speck could cost nearly $7000?

Speck’s owner, Boyd Tisdall, travelled from Outram to sell him at the Charlton Saleyards and was pleased to see him go for a good price.

The three-year-old heading dog was described as a "big strong farm or station dog" who handled tricky situations well, with presence, and had been trialled.

Mr Tisdall bought Speck last year off a friend and had been working with him since.

Speck was a "good honest dog" and Mr Tisdall said he might live to regret his decision to sell the dog at the 63rd sheep and cattle dog sale at Charlton saleyards.

"I could regret selling when the work comes on."

But it meant he could bring on one of his younger dogs.

Joe was a smart mustering dog, and Hemi had the potential to be a trial dog.

He was pleased the dogs met their reserves and said it was a good day for his first time at the sale.

The 20-year-old, originally from Gisborne, recently relocated to Nokamai Station.

He was working other dogs that were going "bloody well" and would return to the sale to sell them in the future.

"A lot of work goes into training a dog," Mr O'Connell said.

"The crowd puts them off a bit," he said.

He had made a pre-trial demonstration of Nudge available, too.

Tuatapere farmer Alton Devery would be giving him a new home and was pleased with his newest worker.

Nudge was good on voice commands, as well as whistles, and was also good with cattle, which suited him well.

George Prouting, from Pukeuri, who first sold a dog at the Gore sale 50 years ago, sold heading dog Rose for $5300.

Of the 43 heading and huntaway dogs up for sale, 34 had found a new home by the end of the day.