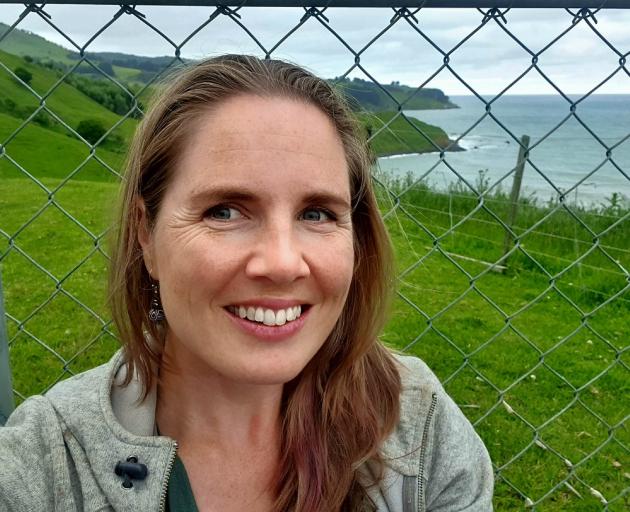 Dr Nicola Dennis wants her son to have a similar rural upbringing to the one that she enjoyed. PHOTO: NICOLA DENNIS
She describes herself as a recovering academic.

Most days, Nicola Dennis is happily ensconced in her home office, on a rural block of land in East Otago, surrounded by animals, and doing her thing as a "data wrangler".

In November, Dr Dennis made the move to self-employment, establishing her own business which focused on the agricultural sector which she has been involved in since graduating from university.

Originally from Northland, her parents moved to be dairy farmers in Southland in 1996. She always had a love of animals, being outside and living in a rural setting.

After leaving school, she did first-year health science at the University of Otago, thinking she might become a doctor or a dentist, but she very quickly realised that one of those roles was probably not for her. What she did fall in love with was biochemistry and she graduated with a science degree in biochemistry and genetics.

She was at an event one day where AgResearch scientist John McEwan was talking about sheep, and she realised that sheep could be an option with her degree.

She approached Dr McEwan who suggested she apply for a job at AgResearch and she landed at job in the animal genomics department at Invermay, working partly in research and partly in product development for the genomes laboratory.

Having decided that science was "for her", a PhD opportunity arose in a neuroscience laboratory in the University of Otago which she subsequently undertook.

Dr Dennis spent six years at Dunedin agribusiness consulting firm AbacusBio working on "all sorts of things" and became very involved with the computer and modelling side of things.

"I became a computer person by stealth," she said.

She performed a variety of data science, greenhouse gas modelling, genetics and writing work for clients around the world.

With the arrival of her son, and being busy as a working mother, she got a "bit burnt out" so she looked around to see what was available, or "shopping for a new career", as she put it.

In a happy coincidence, GlobalHQ — publishers of Farmer’s Weekly and the AgriHQ market insight reports — was looking for a market analyst. She also did some writing for Country-Wide magazine.

Dr Dennis was happy in her market analyst job but took a moment to reflect during a performance review earlier this year when one of the questions asked was where she saw herself in five years.

"I don’t tend to think about that, I get really absorbed in what I’m doing right now."

It got her thinking that she would like to be self-employed one day, that concept having always been on her bucket list, and so she wrote it down and the idea "just grew from there".

Rather than it being something in the future, she pondered whether she could be self-employed "right now" and she made a few inquiries as to whether there would be work for her.

She embarked on her new venture last month and she was booked out until mid-March, quipping "some of that is the pandemic, not my winning personality".

She attributed the demand due to a scarcity of "data people" and she had also hit a certain level of seniority which also helped.

All her work was in the agricultural sector and she was grateful for her "lived experiences", as well as her qualifications, which helped with her understanding of the sector.

"I get it. There’s a whole textbook to be written from people that grew up on a farm," she said.

Dr Dennis, her partner and young son lived on a 30ha property — "some of the roughest land you could ever come across" — but, for her, it was "paradise".

Growing up on the Southland dairy farm, she fondly recalled her school holidays spent on the farm and she wanted to provide that same upbringing to her son.

Covid-19 had caused many people to reassess what was important to them. In the agricultural sector, people were also having to come "out from off the farm and interact".

"Just doing what you were doing before and keeping yourself isolated isn’t going to work for a future business. You do need to keep yourself informed," she said.

Things were changing — not always for the worse — and farmers did need outside help and that was "probably for the better", she said.

When it came to a job, Dr Dennis said she just wanted to work hard — "I don’t really care what it is, as long as it’s challenging and the people are nice. Agriculture has always delivered, there’s always someone doing something exciting somewhere," she said.

When Dr Dennis studied science, there was the inference you were not a real scientist until you left New Zealand — "that’s my take on it" — yet, she forged an enjoyable career in Otago.

"So I guess I’m not a proper scientist," she joked.

If you wanted to stay in one location, then you had to be flexible about what you worked on and she had done that.

She had never really had a plan, her career had just evolved in small steps.

"The whole self-employment thing, if it floats your boat, then it’s just really exciting to do," she said.