‘Just the beginning’ for Escalator graduate 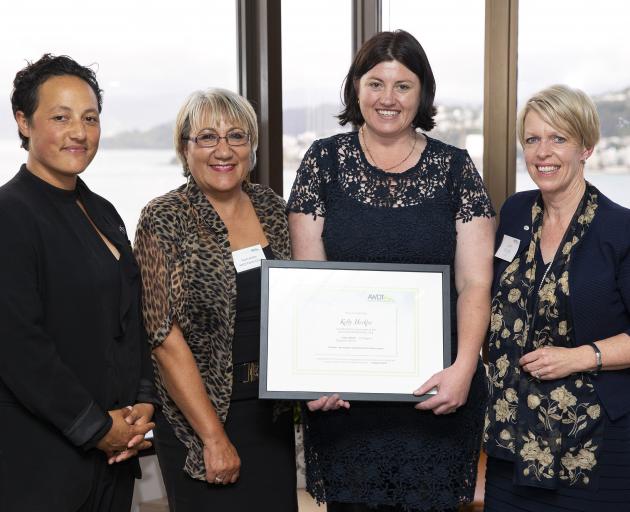 Escalator graduate Kelly Heckler (second from right) with (from left) Labour MP Kiritapu Allan, AWDT chairwoman Mavis Mullins and Escalator alumni chairwoman Jane Wright. Photo: Hagen Hopkins
Escalator might be over for Kelly Heckler but she reckons it is  "just the beginning" in terms of using what it taught her.

The milestone was reached as graduates of the eighth annual programme — including Mrs Heckler — gathered in Wellington.

The 10-month programme provides leadership and governance development to 14 women each year. It takes a wide approach to development, providing women with skills and support, and addresses the barriers they could face when engaging in decision-making.

Participants come from across the primary industries, including dairy, meat, horticulture, arable, wool, wine and honey.

Mrs Heckler is involved with the family farming business at Omakau, has her own farm environmental consultancy, AgriBasics, and is the mother to two young daughters.

Seeing other inspiring women — such as Ranfurly farmer Dawn Sangster — was a catalyst for her to apply for the programme, she said.

Mrs Sangster has been a high-profile graduate of the course. Five months after graduating from the inaugural programme in 2011, she was elected as a director of Alliance Group and was recently appointed a director of Farmlands.

Mrs Heckler said she had wanted to do the Escalator programme for several years but the timing had not been right. This year, she decided it was the year to do it and  was thrilled to be successful with her application.

Seeing the success that Mrs Sangster had, and the confidence she gained from the course, had spurred her on, she said.

Being able to fit it in had been a concern, given her family and work commitments.

But in the end, she "just decided it was worth it", although she quipped there were "definitely a few very limited-sleep nights".

She had been very fortunate to have family support both from her husband James and their respective parents, which had helped immensely.

It was not just the "homework" between modules that required thinking; there was also constant thought processes involved and that was something that required devoting time to. Escalator involved five three-day modules  in Wellington during the year,  the final one involving reflection, goal setting and "where to next".

Among the things that she wanted to get out of it were growing her network, improving her confidence and also her articulation.

She was a big-picture-strategy type of thinker, and on the governance side, she believed she needed to look at that area to maximise her potential.

"At the moment, I’m just waiting until New Year before I decide on what the next step is ... letting everything sink in," she said.

She now had a clear list of criteria  about what she was  passionate about and where she believed she could add value.

Her passion was about making farming businesses sustainable for the future. If it was not for her own children, then it would be someone else’s, and farmers needed to be thinking about what they were doing now to make their businesses viable.

There were some big challenges ahead in farming but also some  exciting opportunities and it was about getting businesses geared up for making the most of those opportunities. If they did not, then there would be nothing viable to hand to the next generation, she said.

Being involved in the course benefited not only participants’ own businesses, but also the farming industry and their rural communities.

There was a "massive" amount of talent among the women in rural communities and Escalator was "just peeling the lid off".