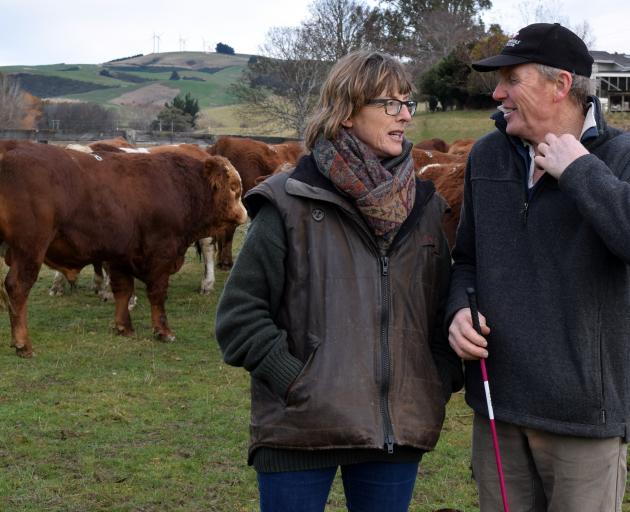 Glenside Simmentals owners Julene and Garry McCorkindale celebrate 30 years of selling bulls on their Waitahuna farm last week and seek to continue improving the genetics of their herd after recently buying a $45,000 bull from the North Island. Photos: Shawn McAvinue
South Otago bull breeders Garry and Julene McCorkindale have spent $45,000 on a bull in a bid to continue a "proud" 30-year history of improving the genetic traits of their herd.

Mr McCorkindale, speaking to about 70 people in a shed on his 750ha sheep and beef farm in Waitahuna and more than 20 buyers livestreaming the auction, said the years leading up to the 30th annual bull sale last week had "flown by real quick".

"Time flies when you’re having fun."

However, the week leading up to the sale had been "trying".

"We were away on Saturday night and came home to find our kitchen flooded after rats chewed through three water pipes." 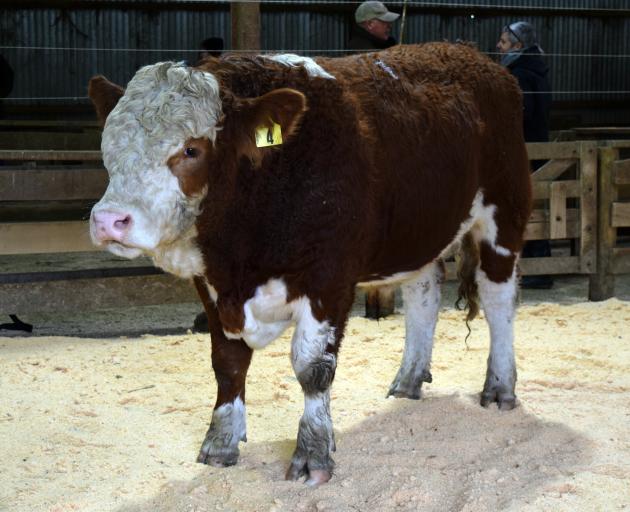 Rising 2-year-old Simmental bull Glenside Hotshot 19004 was one of two bulls which sold for the highest price of $11,500 at the Glenside Simmentals 30th annual on-farm sale in South Otago last week. PHOTOS: SHAWN MCAVINUE
Consequently, Mrs McCorkindale made the lunch for the sale in a hotel in Lawrence.

"You wouldn’t believe you could make so much food from a hotel room," Mr McCorkindale said.

He was proud of the genetic improvements made in his herd over three decades.

All of the cattle offered at the sale last week were in the top 10% of the Simmental breed in Australasia for one or more of the growth traits.

"It’s the first time we’ve managed to do that." 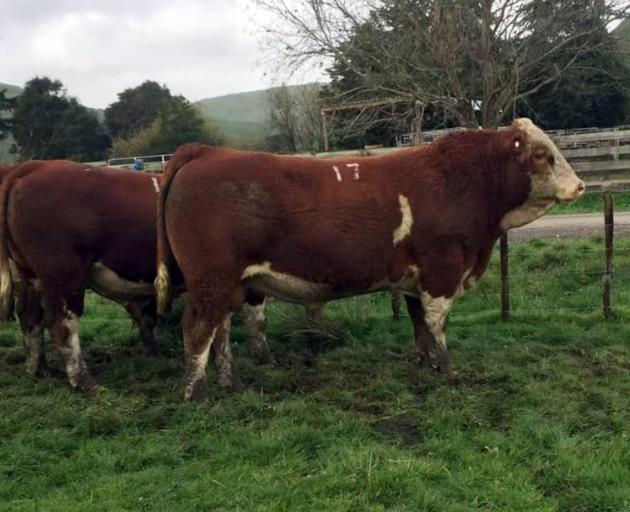 Bull, Kerrah H410, from Kerrah Simmentals in Wairoa, was recently sold to South Otago bull breeders Garry and Julene McCorkindale for $45,000. PHOTO: SUPPLIED
He was also proud the bulls were ranked in the top half for temperament.

Mr McCorkindale, speaking to Southern Rural Life, said he bought a bull online via bidr for $45,000 on May 25.

He bought the bull, Kerrah H410, from Kerrah Simmentals in Wairoa, the biggest Simmental breeder in New Zealand.

The number of bulls in New Zealand which could improve genetic traits in his herd were "very limited".

The breed was popular internationally but it lacked any "new blood" which suited New Zealand production systems.

The $45,000 price tag for Kerrah H410 was the most he had ever paid for a bull but it would allow him to continue to improve the genetics of his herd.