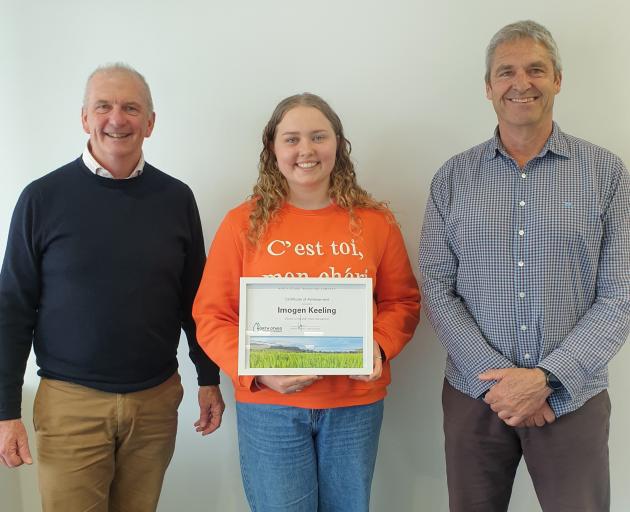 Miss Keeling (16), a year 13 pupil at St Hilda’s Collegiate in Dunedin, has been awarded a $1000 scholarship from the North Otago Irrigation Company.

The annual scholarship is awarded to a pupil who is extending their studies to agriculture.

Next year, Miss Keeling is heading to the University of Canterbury to study engineering.

She has a particular interest in mechatronics with a future application in the agricultural sector.

Her interest stemmed from two aspects, she said; she had taken digital technology as a subject at school and she also grew up on a Duntroon dairy farm, in North Otago, where her interest in farming came from "just living life on the farm".

Miss Keeling was counting down the days to finishing school before taking a summer holiday job in Omarama and then heading to Christchurch to begin tertiary studies.

It was becoming "a lot more real" with the likes of the scholarship and enrolling in courses but she was "super excited".

She was delighted to receive the scholarship, saying it was nice to know others believed in her goals, and that gave her more confidence.

"Some people think in the future farming’s not going to be the same or [be] around.

"It’s definitely going to be around, it may not be the same ... being a part of that change, creating cool new solutions for farmers in New Zealand so that it may carry on going would be really cool," she said.

Miss Keeling’s parents, Geoff and Jan, were heavily involved in the community and everything that they did had "definitely" helped give her skills, she said.