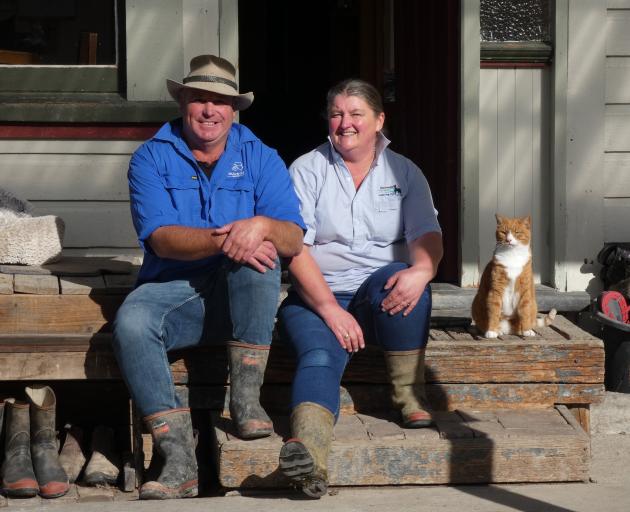 Steve Kerr grew up on the Mackenzie Country’s sprawling Grampians Station when it wasn’t unusual for more than 40 farm dogs to be working in the back country at one time.

For as long as he can remember they’ve always been around him, Mr Kerr says.

Ask him how many dogs he’s got now and he will throw up "about 10" as a round number. Prod him a bit and he’ll admit there are a few more than that.

"There’s everything from the old retired bloke at the door to some young ones that are just starting to go now that are only a few months old."

With the exception of the retiree, they’re all here to work on the farm, but many of them are also being groomed for sheep dog trials.

Old-timer Mack — basking in the sun — never quite made it to national honours, but came close and has been allowed to see his out his life on the doorstep as a reward for his hard work.

That’s the case for most of the dogs at Berkeley Downs, a 580ha sheep and beef farm run by him and his Welsh-born wife, Sue.

The property spreads out from flats into tussock country at the foot of Mt Dobson near Fairlie in the Mackenzie Country. With the homestead about 450m above sea level and the highest point 760m, it’s considered a summer-safe farm. 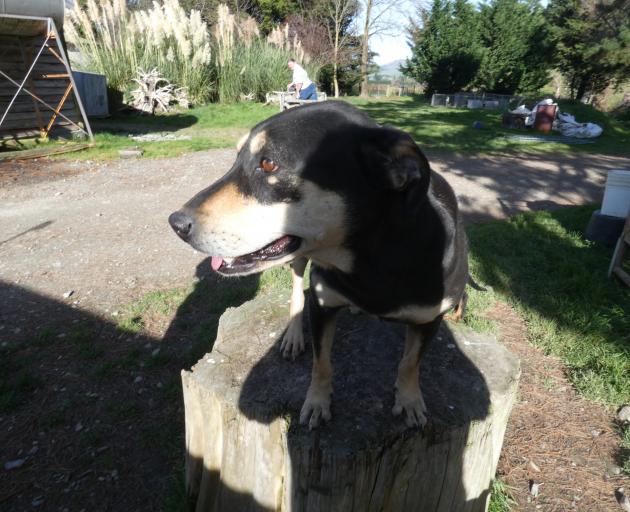 The main workload for the dogs is in the hill country where utes and farm bikes can’t go.
The 2300 Romney-Texel ewes and 700 hoggets are grazed with 250 to 300 Angus cows and beef-cross trading cattle.

"With the altitude here and latitude winters are quite long and we budget on feeding out 100 days through the winter."

The main workload for the dogs is in the hill country as a lot of it can’t be navigated by ute or farm bike, so it’s covered either on horseback or on foot.

Mr Kerr enjoys working with dogs on the farm as much as in the competitive arena at dog trial events.

"Obviously, people who are into sheep and beef and working dogs like animals. For me I can’t remember when I wasn’t around them. I grew up with them and was fascinated with dogs for as long as I can remember. You train a dog up a bit and get them going and you want it to be a good farm dog, so it’s a natural progression that you go to the next step. You might go to the pub and argue about whose dog’s better and everybody likes sport and competition, so it is a natural progression to want to go out

Huntaway brothers Bully and Dodge, who’ve since died, were probably his best performers. Bully won a South Island title in 2011 and got as far as runner-up in the zigzag at the national trials the following year and fourth in the straight, missing out by half a point.

Dodge also got a South Island title and was fourth in the New Zealand finals.

The hunt for the elusive win keeps him active in dog trials.

"We will get it done sooner or later, I suppose."

He’s getting ready for the national sheep dog trial championships and will be taking three huntaways and a heading dog — Pip — who have made the cut.

At the South Island championships, held at Earnscleugh Station near Alexandra, he came away with good success, winning the zigzag hunt and placing third in the straight hunt.

Just 0.75 points separated him and Wairoa’s Ned George from the zigzag title.

He says that’s dog trialling — often decided by the faintest of margins. It’s not for the weak-minded or those suffering from nerves.

"There’s 309 huntaway dogs entered, I think, and they’ve all qualified to get there, so everybody’s in with a chance. To make the top seven out of 309 is good going and you have to deal with not just your dog but three sheep as well and the nature of what they decide to do, so there’s quite a bit that can go against you. But the other side is they’re working well and they’ve had a bit of success this year, so you do go there with a reasonable amount of confidence."

The South’s zigzag champion, Holly, will be taking a crack at the national title and Charge will accompany him for the straight hunt. Both are still relatively young.

"At 4 to 5 they start hitting their straps and hopefully there’s a few good years with Holly and Charge because they’re both 5. Obviously, there’s still day-to-day work to do and a little bit of practice working sheep as you would in a dog trial as opposed to the hurly-burly of the yards, but not too much for them. They are going pretty right and you don’t want to be annoying them or overdoing it."

Another young huntaway who’s only 2.5 years old has also managed to qualify and there are high hopes for him as he’s showing early promise.

"He’s very easy to work with. You give him commands and he’s very responsive and isn’t headstrong so won’t take over. He’s quite a big dog with a bigger bark than the other two have and he also seems to be quite clever with reading sheep and anticipating where they will move next. They all have that to a degree but he just seems to have a little bit of class or the X-factor."

The young dog will get more training before the New Zealand championships, being hosted at the Taumarunui Collie Club from Monday (May 30), as he’s younger.

A top dog needs to navigate the fine balance between following instructions and second-guessing its owner.

"It’s a bit of both and it’s really nice if they can be working it out themselves. But at some point you have to stop them and override them. In the zigzag you get the sheep walking in a line to sets of pegs and they almost work it out and away they go. But they need to be able to turn the corner to the next set of pegs, so if you can’t override them and say ‘shift over’, they will try to keep on balancing them and carry up the hill and miss the pegs."

Earnscleugh Station merinos were used at the Central Otago event, which suited Mr Kerr as he’s grown up with the breed, but Romney sheep will be used in Taumarunui.

That sits fairly comfortably with him too as they have Romney-Texels.

He’s also had his fair share of success in heading events, and has made one national run-off.

Four-year-old Pip has qualified for the short-head and long-head events, so it’s going to be a busy week.

This is his idea of the perfect beach holiday.

His father, who won a South Island title and came fourth in the nationals, managed Grampians Station for 31 years. The family lived on the 19,000ha station with 18,000 merinos and half-breds and a big staff. 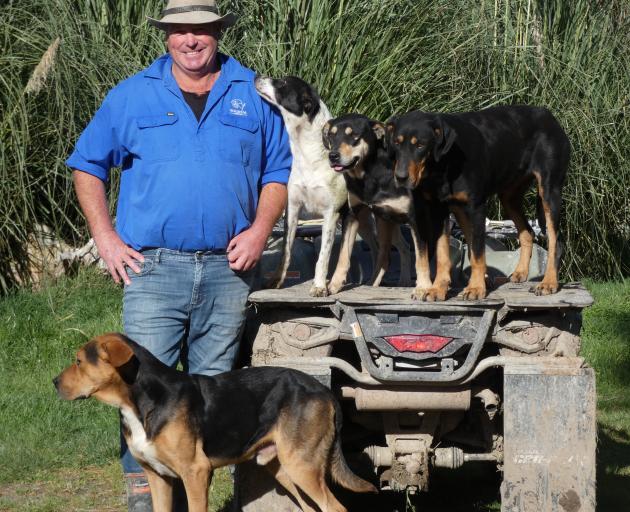 Steve Kerr is taking up four dogs to try to win an elusive national title at the New Zealand sheep dog trial championships in Taumarunui.
"There would’ve been 40-plus dogs all the time. There’s photos of me patting dogs and playing around with sheep dogs that I don’t even remember. I’ve been playing around and training them on sheep since 7 or 8 years old. Growing up in that high country — that’s where the spark came from. There were shepherds and dogs everywhere."

Many dog triallists passed through the station and that would’ve rubbed off on him as well.

His father bought a block closer to Fairlie and eventually worked his way to owning a 200ha farm.

When his father died Mr Kerr and his wife returned home to farm it in partnership with his mother, before selling that for Berkeley Downs.

Mr Kerr left school at 16, his father having lined up a shepherding job for him in Culverden under Tug Burrows. It proved a blessing.

The old Romney stud breeder had a reputation for training up young dogs and Mr Kerr learned a lot from him.

That’s why he spends a lot of his time holding dog training days — either in a role sponsored by Tux or off his own bat, he says.

"Helping people out is human nature, isn’t it? I was keen to put a bit back in for the sponsors, who do a lot for the championships. The other thing is I got a lot of help from Tug Burrows and my father, especially with dogs, so I owe it to them and a couple of others to give back a bit. I quite like helping the young ones because someone helped me when I was young."

Berkeley Downs is too wet to run merinos but the merino link continues, Mr Kerr having been a partner in the Wairua Merino stud for the past two years with Russell Smillie.

"There’s two things I like — obviously sheep dogs and I grew up with merino sheep at Grampians Station and there was a merino stud there. Showing sheep is a bit like trialling and in that day and age showing sheep was big and we would take sheep off to the Christchurch show and try and win a prize. So I always enjoyed that part and then you breed and mate to select the ram for a ewe and try and breed something better and that part’s always appealed to me. I’ve always liked the stud side of sheep."

The stud is based at Mr Smillie’s Hakataramea Valley merino farm and was bought from a breeder who was retiring.

The 300 mated ewes produce fine wool of 19 to 20 microns for garment wear and he and Mr Smillie have been building up sales slowly.

This makes for a busy life and taking several weeks off each year for sheep dog competitions isn’t easy, so he’s grateful to wife Sue for looking after the farm while he’s away.

Mr Kerr says it’s well known that country sport is struggling for numbers, but dog trialling is holding its own — partly because younger women are entering the sport and starting to rise through the ranks.

It looks like the next generation of Kerrs will contribute to this as well as carrying on the dog-trialling legacy.

Elder daughter Ginny is following her mother, having taken up horse riding, and George is doing an engineering apprenticeship, but 16-year-old Sophie is mad on dogs and has already been to a few trials.