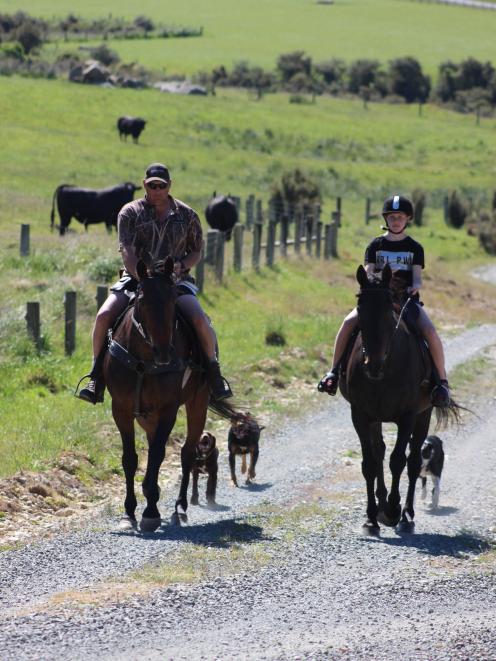 Duncraigen sheep and beef farm manager Paul Smith works on the farm a couple of years ago with his daughter Zara, now 15. PHOTO: SUPPLIED
Athol farm boy Paul Smith had two ambitions while growing up in Northern Southland.

One of them was to leave school as soon as possible. The other was to become a farm manager like his dad.

Pamu’s Duncraigen sheep and beef farm manager based near Te Anau achieved both.

Pamu, which is the Maori word to farm, is all Mr Smith has ever wanted to do. He has been working for Landcorp-owned farms on and off since 2000 and at Duncraigen for four years.

"I’ve learned on the job, and the reason I’ve kept coming back (to Landcorp) was because they spent money training me. It’s the personal development that kept me coming back."

He grew up in Northern Southland and on leaving school became a shepherd in the West Otago area and at stations all over the lower South Island.

"I was not an academic, but there were things that interested me, like computer work. I would never have learned that at school — I couldn’t wait to leave school. We didn’t have the technology that kids have today. I’m certainly not a whizz, but I can find my way around a computer and a spreadsheet."

"I picked my jobs. I never go to a job just because it’s a job. I wanted to get something out of it."

However, the turning point came when he went to work as a stock manager at Landcorp’s Kapiro Station Angus stud in Northland for three years.

"As a shepherd I aspired to be a manager of a big extensive property, but when I went to Northland, my ideas changed. I got a bit more into the technology and in the challenges in different places."

His way of looking at animals changed as he got more interested and involved with genetics.

Duncraigen is involved with the South Island Genomic Calibration (SIGC) Flock. The SIGC is a partnership of researchers and industry groups (Beef + Lamb New Zealand Genetics, Pamu, AgResearch, along with breeders) which enables industry implementation of genomic predictions for growth, yield and meat quality in terminal sheep sires.

So much was changing in the farming scene because of policy and outside pressures, Mr Smith said.

"I’ve spent pretty much all my life involved in farming. There has never been so much pressure, for instance through social media."

Farming had become more visible and subject to public scrutiny and perception; life on the farm had also become much more of an open book, he said.

The biggest change he could see ahead was winter cropping — "the days are numbered" — because of water-quality issues from run-off and the new freshwater regulations.

He predicted farms of the future would have a commitment to all-year round, all-grass farming, animal health and that there would be more protected/fenced-off areas within the farm boundaries. And farming was going to be more diverse.

"I think it’s going to look a lot better. But the problem is staying profitable and handling all the on-farm costs."

He will be sharing his experiences at an upcoming open day next week. The Farmlands and Safer Farms,Tomorrows Farms Open Day invites all locals to Duncraigen on Thursday December 3.

"We’re keen to bring together those who are interested in what’s happening on our farms locally— it’s a chance to have a look around the farm, and a chat about the things that are relevant to us."