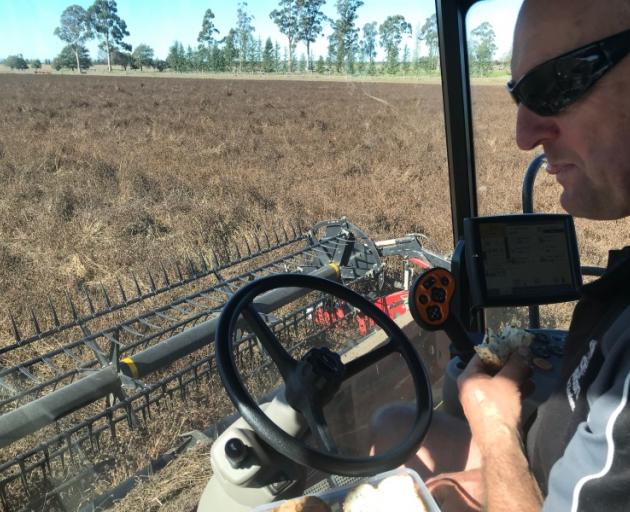 Beaut smoko window ...Brian Leadley grabs a quick bite during clover harvesting. PHOTO SUPPLIED.
Arable farmers Brian and Rachel Leadley welcomed a house guest during lockdown, found new ways of functioning in their work bubble and the wedding of their eldest daughter, meant to take place in the garden of the family farm on April 4, was postponed.

It has meant co-existing with the mother-in-law for Brian, but the gardens, which are looking immaculate, have been a focal point for Rachel to maintain during lockdown.

Otherwise, it’s mostly business as usual on the 400-odd hectare property, where Brian and Rachel primarily run a grain and seed operation, with store lambs.

It has just taken extra planning.

‘‘We are fortunate that we can run the business, we are thankful for that,’’ said Brian, who is also United Wheatgrowers NZ chairman.

He said the timing of Covid-19 restrictions for arable farmers had also done little to disrupt production — harvest was able to be completed, they were able to replant and buy in lambs.

‘‘The effect is not too major and we can do those things.’’

However non-essential jobs such as fencing maintenance, hedge cutting or general clean-ups had been put on the back burner. 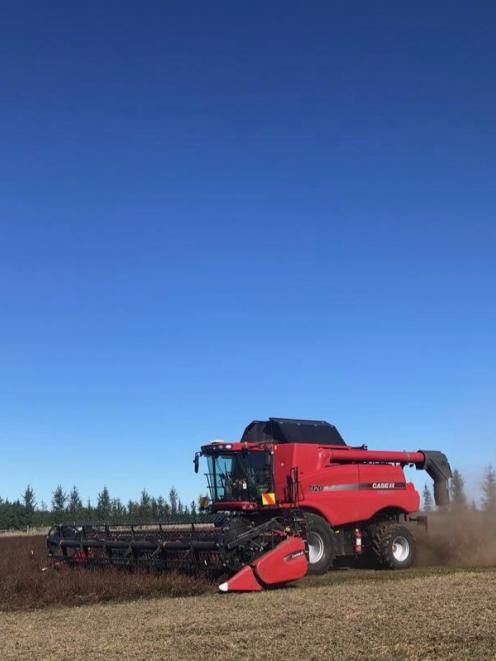 Photo: Supplied
Keeping everyone on farm safe — they have one fulltime worker and one extra at harvest time — has also meant work-safe practices providing hand sanitiser, limiting machinery and vehicle use to one user or sterilising between users and social distancing.

A makeshift smoko room had also been set up in a nearby shed to limit the people entering the house bubble.

‘‘We are able to operate and while I am not technology-minded we have technology on our side. Twenty years ago it would have been a bit more challenging. Family contact has certainly been a help for us,’’ Brian said.

The Leadleys’ three adult daughters all live outside the district; two in Christchurch and one in Fairlie.

While he has been in telephone and texting contact with people, he is looking forward to ‘‘face-to-face connections being resumed’’.

On the farm, there had been plenty of industry support with field representatives, stock agents, or machine engine and transport companies making contact by phone rather than visiting.

Health and safety concerns had to be considered such as auger use.

‘‘It’s all manageable but needs to be considered,’’ he said.

Shearing, which started last month, just a few weeks later than normal, also took more time due to gaps between stands and a whole process around collecting wool.

Where usually there were three or four shearers, the Leadleys had just two due to demand and they were unable to travel together.

‘‘Major disruption is not there, but the ways we do things need to be thought about, such as a trip to town for drench, now means a phone call first and contactless pickup.’’

It had been manageable but ‘‘if it goes on, and we drop levels then go back to Level 4, it may be a bit different’’.

He said re-establishing next year’s crops, such as grasses, clovers, green feed for stock, wheat and barley was ‘‘essential to get on and get them in’’.

Although stored harvested grain was fine until Christmas, flour needs for next year, which would supply the following 12 months and beyond, needed to be planted now.

‘‘How fortunate we are to keep our business going where others can’t. Crops and animal welfare have to be looked after.’’

‘‘It could have been a lot worse ... it is manageable with recognised support from other businesses.’