Artist and actor riding high in a bull market 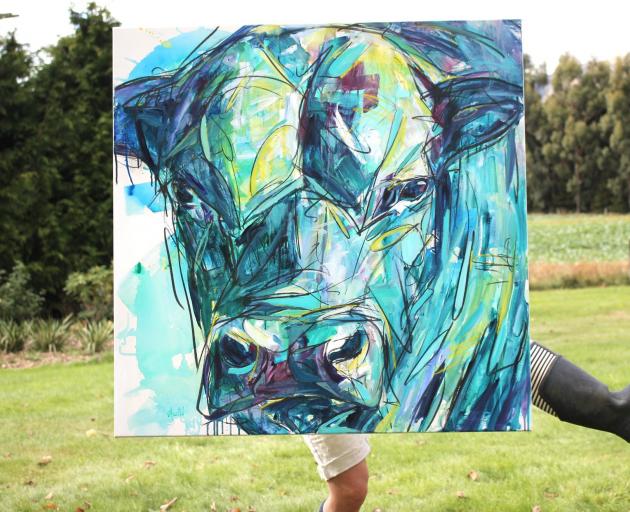 One of Amelia Guild's paintings featuring a bull. Photo: Willa Dunbar
"You're the chick who paints cows. You're the bull painter."

Amelia Guild gets used to hearing such comments from those familiar with her bold and bright paintings of animals, particularly cattle. 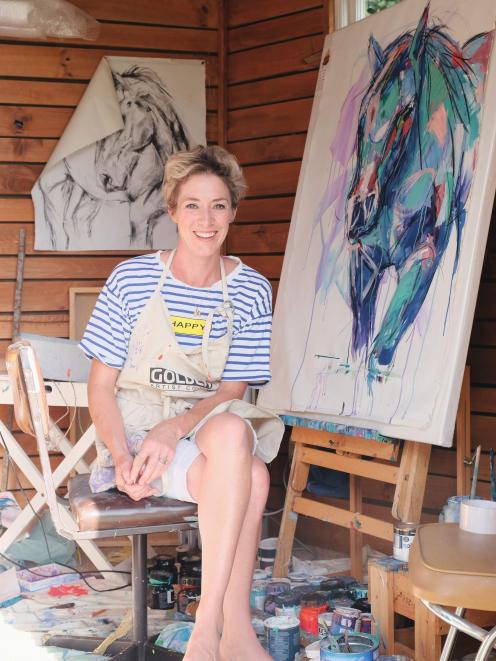 Artist and actor Amelia Guild at home in her studio in the Canterbury high country. Photo: Julia Atkinson-Dunn
The Canterbury-based artist and actor is excited about her upcoming exhibition, "Mustering the Muscle", which opens at The Artist's Room Fine Art Gallery in Dunedin on May 11.

Life is busy - "on the cusp of getting chaotic" - for the mother of 4-year-old Willa and 16-month-old Rollo.

But she is also living the dream, being able to reside in her "happy place" on High Peak Station, the high country property she grew up on, inland from Windwhistle, near the Rakaia Gorge.

Never did she think she could forge a career as an artist and actor while living in the high country, but she has managed to combine her two passions with living on the land.

She then "wandered around Europe via art galleries" before moving to Auckland, where she had a hankering for acting.

In 2012, there came a "rather serendipitous meeting" with Emma Newborn - "kind of like a blind date" - when the two were thrown together as strangers at an artist collective and given two weeks to come up with a 10-minute performance of anything they wanted.

One thing led to another and their piece about two dogs on heat, locked in a bitch box, was soon developed into a full-length comedy show The Bitches Box.

The show had its debut in woolshed performances in the South Island but later went global, with performances from Edinburgh to Melbourne, and was followed by another show, Sons of a Bitch.

Ms Guild said she and Ms Newborn, who was now one of her dearest friends, had a "real blast" doing the shows and there were plans in the pipeline for its next iteration.

It was always Ms Guild's dream to combine her two passions of art and acting and there was a very complementary balance.

Painting was quite a solitary pastime, which she liked, saying she was "certainly not a full extrovert". Rather, she was quite shy but she believed she had trained herself to be more confident.

She had always loved High Peak Station, feeling a sense of calmness whenever she returned, despite being eager to "get away and explore the world" when she was younger.

That sense of place was deeply rooted but she did not ever think she could live at High Peak and be an actor and artist.

But, rather conveniently, she married a beekeeper, Tom Dunbar, who at the time was a professional skier.

They could now be part of the larger operation at High Peak and she was very happy living on the property, surrounded by animals and raising the couple's two children.

Ms Guild's interest in painting cattle went back to her bursary art portfolio, while she was at secondary school.

She recalled her tutor telling pupils to find "that one thing" that excited them and to then sketch it. She sat in the bull paddock sketching the animals for days, having always loved cattle. 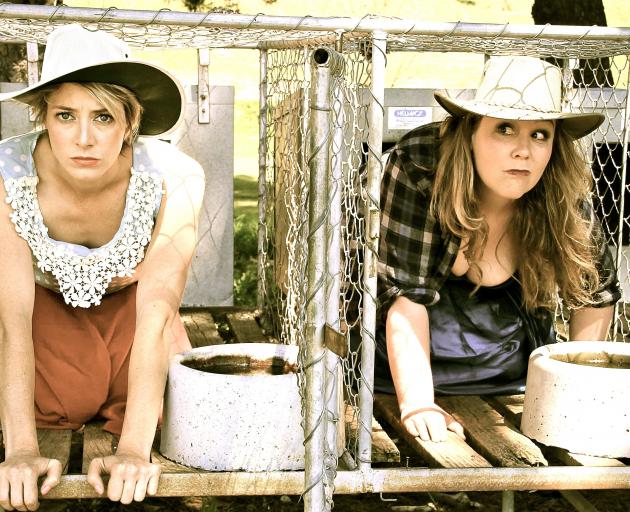 Amelia Guild (left) and Emma Newborn during a promotional shoot for The Bitches Box show. Photo: Supplied
There was something about the large, formidable, yet docile, animals, and the chunkiness of their muscles, she said.

With a love of colour and the joy she got from rural living, she wanted to show the subjects she painted "in less obvious ways", rather than a traditional red Hereford or black Angus.

While she had painted other animals, including dogs, horses, and deer - there is a large deer operation on High Peak - she always seemed to come back to cattle, whether a mob or a full portrait.

There had been quite a few international sales over the years and it was not just rural households that bought her art - equally, urban homes could "have a cow" on their walls.

Ms Guild was pleased to be returning to Dunedin for the exhibition, saying she had very fond memories of the city from her tertiary study days.

She was also pleased with the works for the exhibition, having gone off in a "slightly new direction" with a bit more mixed-media. It was "a bit more gritty, a bit more grungy".

When it came to the future, Ms Guild said she did not want to predict that too much. Hopefully, it would involve more creativity with art and writing and performance.

She was also keen to help her husband more with the honey, most of which was exported to the Middle East. They were keen to also have more of a local presence.

Also wanting to be "a present mother", Ms Guild said she was very fortunate to have a very supportive husband and family.