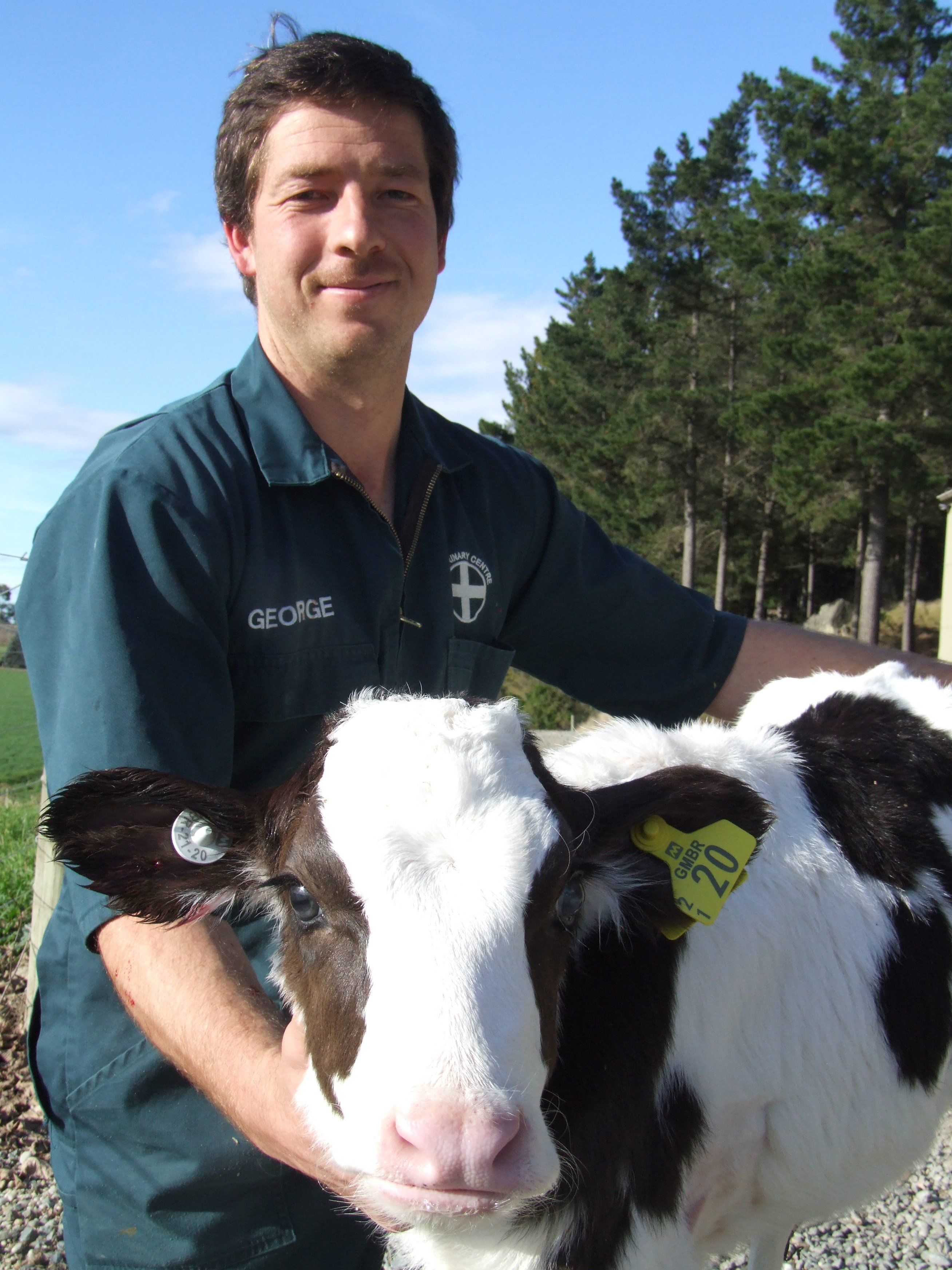 Oamaru veterinarian George Smith with a valuable heifer calf which he saved from near-death. PHOTO: SALLY RAE
Warning - this is a heartwarming story.

When Oamaru vet George Smith got called to a sick calf on a North Otago dairy farm late last month, it was a standard callout.

But on arrival, dairy farmer Nathan Bayne told him the 4-day-old heifer was the most valuable calf he had ever had and was possibly worth more than $50,000.

Mr Bayne and his wife Amanda, from Henley Farming Co, own the prominent stud Busybrook Holsteins, near Duntroon, which recently held its "platinum edition" sale which generated turnover of $863,000 and a top price of $38,000.

Mr Smith, who works for the Veterinary Centre, arrived at the Baynes’ a week after that sale and discovered a "moribund calf on its last legs".

It could not stand up, hold its head up or drink, he said.

It was diagnosed with failure of passive transfer which meant reduced absorption of maternal antibodies. A recent study showed one-third of New Zealand dairy calves had FPT.

Calves were immuno-compromised and at greater risk of disease, often leading to infections in the brain, joints and eyes.

In the case of the Baynes’ calf, it covered all three - it was blind, "brain-dead basically" and could not stand up.

Unlike human ones, bovine placentas prevented the transfer of antibodies, Mr Smith said.

Although vets always strived to do their best with whatever animal they were dealing, the value of the calf did provide an additional challenge.

"It’s not very often we get to deal with an animal of that value and get to perform individual medicine to that extent," he said.

The calf’s value determined he was able to undertake more intensive management than economics would normally dictate with a commercial animal.

He hooked it up to a drip and returned that night to check on it. By then, the calf could hold itself up but there was still no suckle reflex and Mr Smith was struggling to get on top of the infection.

Without intensive treatment, it would not have survived the night, he said.

Mr Smith was on call over the weekend and he offered to take the calf back to the clinic, placing it in his ute’s front seat.

He told Mr Bayne he would return a live calf, as he was determined to do whatever he could - "just because it was a challenge".

Back in Oamaru, it was put in a heated dog kennel, hooked up to a drip pump and oesophageal feeding was used.

An ultrasound was taken of its heart to check for congenital abnormalities, multiple antibiotics and anti-inflammatories were used to control the infection, and it was a "true intensive care patient".

He checked it every two hours that weekend, until 10pm, and came back into the clinic at 7am.

By the Monday morning, the infection had settled down, but its brain function "wasn’t flash".

Mr Bayne picked up the calf - Mr Smith quipped it did not get quite the same chauffeur-driven experience as he provided — and returned home.

Despite his best efforts, Mr Smith was still pessimistic about whether the calf would make it. So when he received a call from an "over the moon" Mr Bayne last week to say the calf was fully recovered - apart from a bit of cloudiness in its eye, you would "never know" - he was thrilled.

"We managed to bring the calf back from the brink. We don’t often get to take this kind of thing on," he said.

In his fifth year out of Massey University, Mr Smith admitted the calf was probably one of his most exciting and rewarding bovine patients. While it was just another job, he got a "huge kick out of it".

Mr Bayne was equally thrilled, saying the calf had a "pretty wicked pedigree".

"Who knows where she’ll end up?"

With calving approaching, it was timely to remind farmers that one way to prevent FPT was to ensure calves got 10% of their bodyweight in gold standard colostrum within 24 hours of birth, Mr Smith said.

Jeff Spillane has been appointed as chief executive of Veterinary Centre Ltd.

Established by Simon Laming in Oamaru in 1979, it has grown to just over 80 staff, including 30 vets, with centres in Oamaru, Waimate, Palmerston, Omarama, Kurow, Ranfurly and Glenavy.

Mr Spillane, who was previously its commercial manager, said it had got to the size that it was "a bit hard to leave the strategic thinking and business thinking to the vets".

Originally from Temuka, he completed a science degree at the University of Canterbury and then worked for PPCS (now Silver Fern Farms) in Christchurch and Dunedin, mainly in compliance roles.

He then joined Lean Meats (now Oamaru Meats) in Oamaru as compliance manager and later managed the plant for several years before joining Veterinary Centre.

The attraction was it was an "amazing business".

Not only was it focused on customers, but it also had a nice community edge to it, he said.

Mr Laming’s ability to pull together the team he had was "phenomenal", particularly in a provincial town.

Mr Spillane was completing his MBA at the moment and that was proving valuable in his new role, providing the business aspect, given his background was in science and compliance.