The business giving tourists a taste of the country 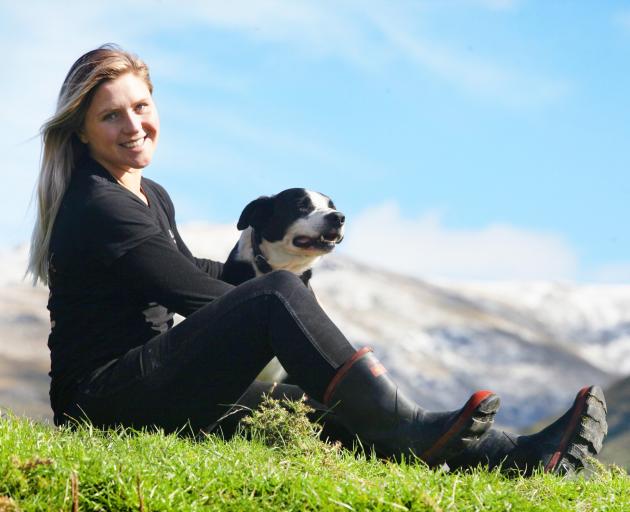 Laura Douglas and her trusty companion Lad, whom she describes as her 2IC. Photo: Mike White/North And South
It is probably just as well that Laura Douglas has ditched her stiletto heels, given her days can include chasing errant pigs.

And while leading a runaway porker next to a state highway might draw a few odd glances from passing motorists, it is all in a day’s work for the self-confessed farm girl.

In a gutsy move, Miss Douglas (31) traded in a successful corporate career to establish an agri-tourism venture near Kingston in late 2016.

In a major development for her fledgling business, Real Country recently confirmed a contract with international bus tour company Contiki to provide travellers with an authentic Southland farm experience.

Close to 4000 Contiki travellers a year would enjoy interacting with a variety of farm animals and trying their hand at activities like clay target shooting, target shooting with air rifles, archery, and stock whip cracking.

As sole wrangler for the business, Miss Douglas’ role was a far cry from her previous corporate career which, most latterly, saw her working for a global software company that developed cyber analytical tools.

But the farm life was not something that was new to her; she was brought up on a sheep farm in Mossburn in Northern Southland.

When it came to careers, her parents encouraged both her and her brother — now an orthopaedic surgeon — to venture outside Southland and farming.

So she headed to university and completed an MBA "and a few other things" but remained a farm girl "deep down".

She had grown up as a keen enthusiast of hunting and fishing and, while at university in Dunedin, she used to do a lot of pig hunting with a group of guys. Their girlfriends often commented how they were keen to also go but did not want to make fools of themselves.

Something she enjoyed was taking them out; getting them outside their comfort zone and allowing them to become comfortable enough to do it themselves.

When it came to later launching her own business, the lightbulb moment came when she doodled on a piece of paper in her Christchurch office.

"I just drew this picture on a bit of refill paper of what I wanted life to be like in five years and there wasn’t a stiletto in sight," she recalled.

The picture involved a horse, hills, a dog, four-wheel-drive truck and a jet-boat. No matter how much money could be made, that life could not be had in the city, she said.

So she quit her job in August 2016 and moved to Queenstown, where she worked for the minimum wage in the tourism industry.

The original idea for a business was getting women outside their comfort zone by teaching them to do things like backing a trailer and shooting a gun. That evolved into Real Country, which was a little more global growth oriented.

The idea was for visitors who wanted to see the "real New Zealand" with a "real Southern girl".

Business got off to a very slow start, with her first group just before Christmas in 2016. Feedback from some in the tourism industry in Queenstown had told her it was a great idea, but would not succeed if it was not in the resort.

But for Miss Douglas, the "whole point" was to get out of the hustle and bustle, which was why it was based just south of Kingston.

Before her second group of visitors, she was both nervous and excited, and half an hour before they arrived, she rolled her ankle badly.

However, she pushed through the pain to deliver the experience. Later, her ankle swelled so badly that she had to cut her gumboot off.

There had been "amazing" community support for her venture. She now had an information shop in Kingston and was looking to hire her first staff this summer.

She was looking forward to a busy season, particularly with the Contiki contract, which began its tours earlier this month.

"Something I have to keep reminding myself is every tourism company in the area would give their right arm for the chance to be an inclusion product for Contiki," she said.

Having managed to attract the tour company’s attention was "pretty epic", as it was very hard to attract any kind of attention when it was such a small business.

Miss Douglas acknowledged it was a gutsy move to establish the business, but at the back of her mind had been the fact that she could always go back to her corporate career if it failed.

In the early days, there were moments when she wondered why she was doing it — " it would be some much easier to go back and get a job" — but she kept going. She quipped she was not sure whether that was due to ego, stubbornness or that fact she did not want to have to say that she failed.

Miss Douglas relished the opportunity to answer questions from visitors about farming or her rural upbringing.

"I have this life where I’m a farmer, be it a show farmer. It’s amazing. I absolutely love what I do," she said.

Next week, she was a keynote speaker for sessions in Southland organised by Venture Southland around promoting agri-tourism in the South.

Particularly with markets "all over the show", she believed it was important for farming folk to diversify.

Because she had been away from the region and lived overseas and in cities, Miss Douglas said she did not take the rural lifestyle for granted now.

Someone recently asked her when she last wore her stilettos, and while she tried to remember, she could not recall.

"For me, getting dressed up now is cowboy boots instead of gumboots and a white shirt instead of my ... woollen jersey. And I’m fine with that.

"I even go to meetings in Queenstown in my gumboots."