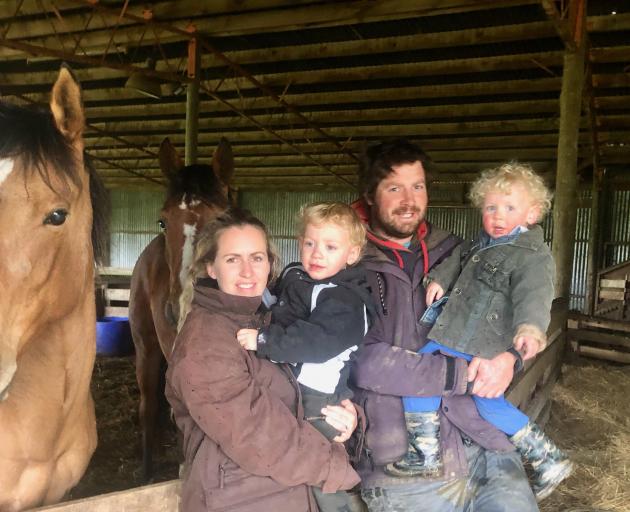 Casey moved to husband Rhys' family farm near Owaka just under three years ago and things have been moving rapidly since, as her country music career begins to gain momentum and she is about to set off on a Somewhere Back Road music tour, raising funds to produce her first solo album.

It is just over a year since Casey underwent surgery to extend the size of her skull and release the pressure on her cerebellum and brain stem tissue which was pushing against the hole at base of her skull. For years Casey said she has experienced chronic fatigue and headaches which she attributed to "a few too many" horse falls. Being pregnant with twins, the symptoms compounded and Casey blacked out.

"It was then they did a scan and diagnosed the problem."

While the surgery isn't a cure for the condition, it has relieved the symptoms for now.

It was while staying home, recovering and looking after her two young boys Luke and Cole, Casey found her song-writing came easily.

"It was quite an emotional time for me and I found an outlet in writing my songs."

It was also not long after her surgery that she was approached by the NZ Rodeo Cowboys Association to sing at the National Rodeo Final. Initially, she turned the opportunity down but as the months went by she realised it might be something she could attempt to do.

"It was always a life dream to sing at a national final, and actually, it went fine despite very little practice.

"That opportunity was a catalyst for getting me back performing a lot quicker than I expected," she said.

The first single she has recorded is called Somewhere and can be found on online streaming sites such as Spotify. She said she had long booked in to record a music video with a recording company to accompany the song but the week leading up to the planned recording, things were not meant to be.

"Both Luke and Cole were hospitalised at the same time with separate illnesses and it rained the entire week. In the end we just had to flag it."

Not wanting to hold up the process for possibly another six months, she released it anyway and feels very proud of the final product.

"I have been approached a few times by other artists wanting to sing my songs, which is really cool."

Casey is booked to head to Australia next year to produce her first album with a top country music producer.

"It's very expensive, though, which is why I am putting myself out there on social media and trying to raise the funds using my music as a business in its own right."

One thing Casey has learnt from this whirlwind of events: live life to the full.

"You can't wrap yourself in cotton wool. You've just got to get on with it."

Casey’s Somewhere Back Road tour:
Owaka — November 8
Alexandra — November 22
Luggate — December 20.
Canterbury locations and dates are still to be released.
A horse trek and barn dance has also been planned for January 31, at Poolburn, in Central Otago