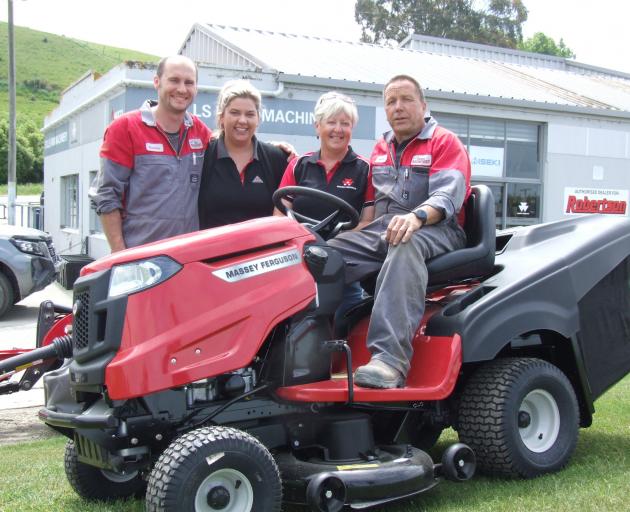 Not only does Mr Currie mark 20 years since he joined Stills Farm Machinery at Pukeuri as an apprentice mechanic but he and his wife have now bought into the business.

Owners Kerry and Raewyn Still were delighted, particularly since he had been there since he left school and they considered him "like a son".

The passion for the business the couple established 25 years ago had not diminished and it would continue to operate as business as usual and Mrs Currie would be working in the office.

"It’s like a big family, that’s how it feels," Mrs Still said.

Mr Still grew up on a farm at Five Rivers in Southland and started his diesel mechanic apprenticeship in Mossburn when he was 15, quipping it was "better than school".

"In those days, you did everything from a lawnmower to great big dozers. I’m still doing it and I still enjoy it," he said.

Back then, it was very different without the "computer stuff" involved with machinery now and you could "get someone going with a hunk of wire".

Mr and Mrs Still moved to North Otago 34 years ago and, initially, Mr Still worked at Waitaki Tractors before leasing a workshop. They bought the former BP service station at Pukeuri, just north of Oamaru, in 1996.

The couple worked together "from day one". When they first opened their business, they enrolled their children at Hilderthorpe School. Each morning, they would go to work with their father and then catch the bus to school, returning to the business to do their homework.

When Mrs Still closed up, they would go home with her while their father would continue working, often until midnight. They did not have any other staff in those early years.

"I’ve never changed a nappy in my life, I was always at work," he said.

"And that’s no joke," his wife added.

The changes came not only in the workshop but also in the office with the advent of computers and software. When they first started, administration was done manually and Mrs Still laughingly recalled how the couple had a fight — "for years" — every month when the accounts were sent out. Computers put an end to the labour-intensive job — and the fights.

Mr Currie, who could change a nappy, grew up in Perth and finished his secondary schooling in Oamaru, where his family was from.

His father was a mechanic and he had enjoyed working with cars through school. He saw the Stills’ advertisement for an apprentice and liked the idea of it. In recent years, he had managed the workshop.

"I like the challenges. There’s always something different to try and repair or sort out. I quite like a variety of work," he said.

Mr Still said the growth of the dairy sector in North Otago had been good for the only locally owned farm machinery business in North Otago and meant they were busy virtually all-year round instead of six months busy and six months quiet.

Grateful for the support of their loyal clients, they serviced an area that stretched to Waimate, Omarama and Palmerston.

Logistics issues caused by Covid-19 meant that new machinery was hard to get — tractors coming in to the country were sold before they reached the site — but sourcing parts "hadn’t been too bad", Mr Still said.

Mrs Still said it had always been a fun place of work and there was usually "a bit of banter", Mr Currie said, dryly adding that he reckoned Mr Still had "mellowed" over the years.