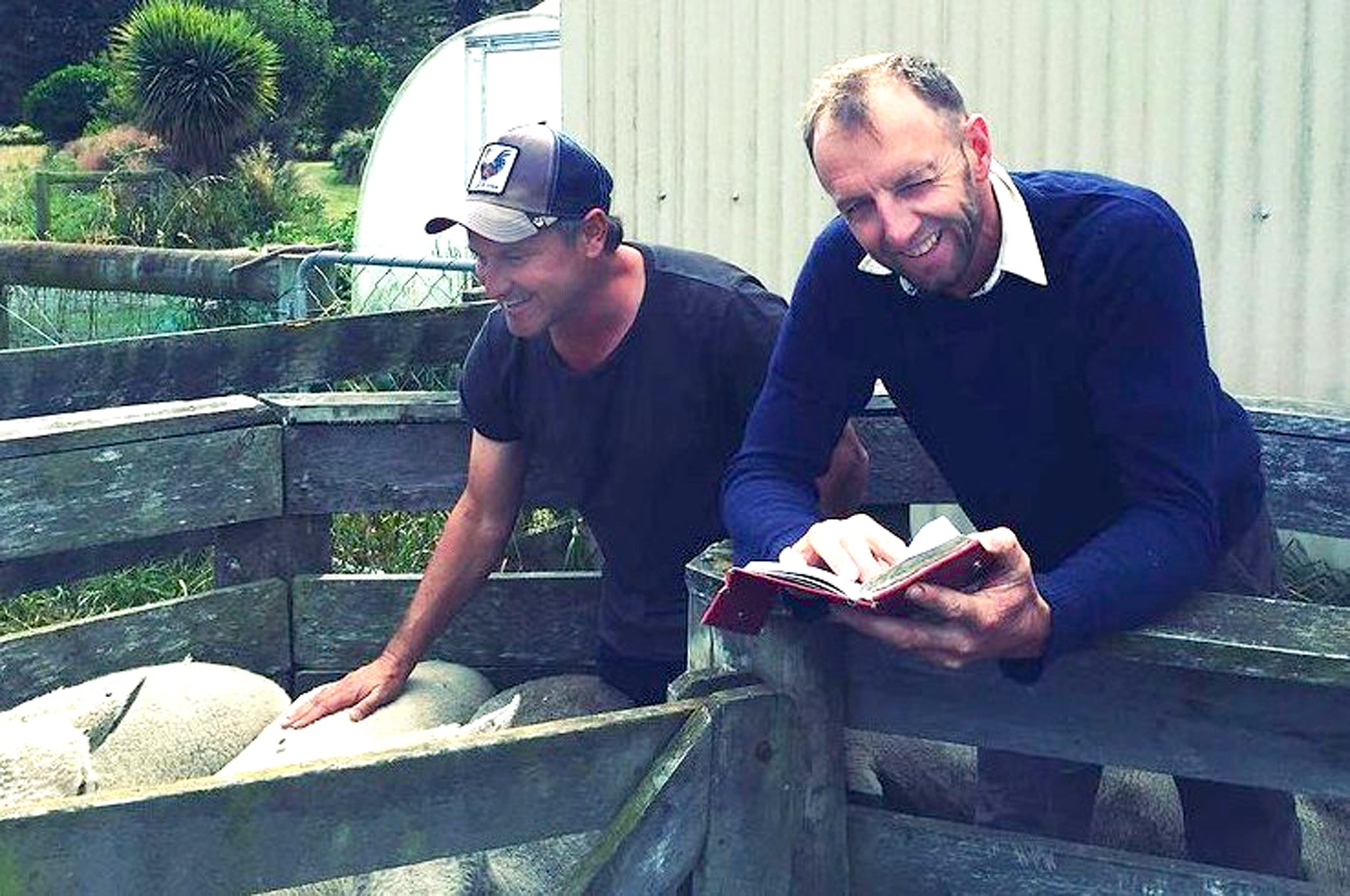 Southdown breeders Matt Chisholm (left) and Dave Robertson inspect some sheep at Mr Robertson’s property in North Otago. PHOTO: SUPPLIED
Matt Chisholm is the new ram on the block in the world of stud sheep breeding - and he could not be happier.

On Monday, Chisholm - a familiar face on television and an advocate for mental health, having publicly opened up about his struggles with depression - will head to North Otago to sell a ram from his newly established Southdown stud The Land.

The Cordyline Southdowns ram fair will be like no other, held in the grounds of Brookfield Park, a Heritage New Zealand category 2 listed property which featured in the New Zealand House and Garden tour in 2019.

Built on the outskirts of Oamaru by renowned local architect Thomas Forrester for original owner John Gilchrist, the first mayor of Oamaru, it is now owned by Jennifer (JJ) Rendell, who since buying the property in 2003 has created an imaginative garden retreat surrounding a restored Victorian homestead.

Cordyline Southdowns, owned by North Otago couple Dave and Abby Robertson, will offer about 40 rams. There are also six entries from John and Margaret Macaulay’s Tahrua stud in South Canterbury, and Chisholm’s solitary offering of a ram he has dubbed Blair, after prominent Southdown breeder Blair Robertson.

Chisholm, who grew up in Milton and Oamaru, had had a longtime interest in livestock and said it was now a privilege to be part of the stud breeding world.

During the latter stages of living in Auckland, when he was battling with since much-publicised depression, he would "get on Google and research up the wazoo".

He had always liked the look of Southdown sheep and, after reading their story, fell in love with the old pure breed which had "stood the test of time".

The Southdown is the oldest of the terminal sire breeds in the United Kingdom, and originates from the native sheep which have roamed the South Downs in the South of England for many hundreds of years. It was developed into a fixed type in the 18th century.

Chisholm had discovered the breed was "making a real comeback", particularly for hogget mating, and he also had less-commercial reasons for wanting them in his paddock.

"For me, it’s basically about looking after myself and my mental health. I just want to walk around them and feel good about looking at good animals. They’re really commercially viable, it’s ticking all my boxes," he said.

Chisholm and his wife Ellen are living in Omakau with their two young sons Bede and Finn, and baby daughter Bree who arrived in early October. They are building a house on their 29ha block of land at Chatto Creek, in the heart of rural Central Otago.

Chisholm founded his stud with the purchase of six ewes from Blair and Sally Robertson’s Merrydowns stud and five ewes from the Cordyline stud. When his first ewes arrived, it was "like a midwinter Christmas" for him.

Admitting to having an obsessive nature, no longer was he going to bed thinking about what the biggest current affairs story he could tell was. Instead he was thinking about lambing percentages and the likes.

"Blair" the ram was the progeny of an in-lamb ewe bought from Merrydowns.

"It’s a bit unfair because I didn’t breed him. It’s got my ear tag in it, really its a Merrydowns sheep," Chisholm said.

Originally he had planned to breed from "Blair" but he later decided to sell the ram and purchase some new blood.

"All I really want to do is just do something that I love. If I can sell a couple of rams a year to real red-blooded legitimate farmers, I’ll be chuffed."

Chisholm acknowledged he had never been happier, even if it did mean he spent "far too much time" moving a couple of rams from paddock to paddock.

He felt very grateful that he had got to a position in life where he could make a certain amount of money doing the things he needed to do, which then opened up time to hang out with his family, and his land, "and have great conversations with good buggers".

As his "serious work" was winding down for the year, Chisholm headed to West Otago on Tuesday this week for the Merrydowns ram sale, which offered both Southdowns and Romneys.

He was already familiar with some Southdown breeders — he did a talk during a Southdown Sheep Society’s southern tour earlier in the year, and he played rugby for Lawrence with the society’s president Don Murray many years ago.

Farmers were great; they liked that he was into sheep and wanted to know why, he said. They were also great at explaining things to him and he reckoned he quadrupled his knowledge in an afternoon.

Over several cans of Coke — Chisholm has been sober for more than a decade — he talked to "a lot of good buggers"— "mixing with my clan", as he put it — and, as he drove away, he realised that was why he had "come home".

Chisholm was delighted to be taking part in the Cordyline sale, saying Dave Robertson had "all the knowledge", produced really good sheep and it was being held in a great location.

"I feel just bloody chuffed that he’s not laughed me out of the province and he’s invited me along."

Veteran Southdown breeder John Macaulay was going to "bust out" his saxophone at the sale.

Dave Robertson quipped the ram sale could be "almost like a wedding".

The motto was it was the latest version of an enduring breed.

"I can’t take any absolute credit for the stock I have, a whole lineage of Southdown breeders come before me," he said.

It was important to keep purebred sheep "going forward" and he liked having both new breeders, such as Chisholm, and older, established breeders such as Mr Macaulay who had been involved in the Southdown breed since 1961.

For Mr Robertson, his aim was to continually try to breed better sheep while also trying to be more inclusive with other breeders.

"We need to work together to breed better sheep.

"I’ve always just tried to have an enjoyable atmosphere for myself, family and friends and ram clients. We’ve just got to keep it real. The other theme is farmers are real people, they’ve got real problems.