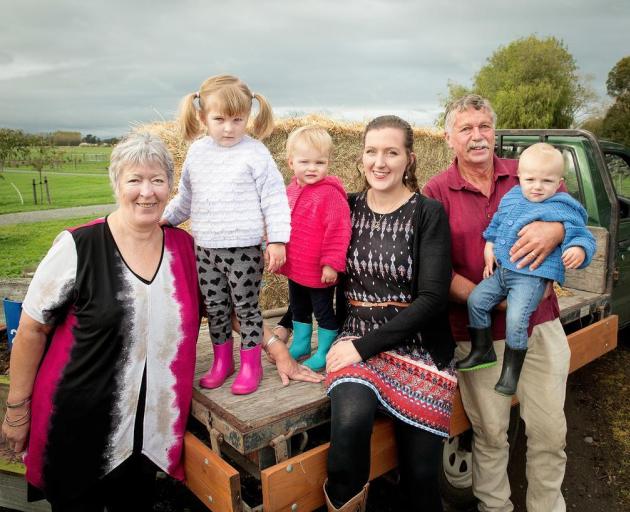 The Collins family celebrated 150 years of farming in Springston on Saturday. Julia Evans speaks to Murray Collins about his family who have lived and worked the land and their roots in the newspaper industry.

There’s Murray and Judy, their daughter Jenny and grandchildren Elsie, Henry and Leila.

Those are the three generations of the Collins family currently living on Springston’s Pendah Farm, which has celebrated 150 years of operation.

But before them there was William, Walter, Leslie and Jack Collins.

William was a typographer who sailed to New Zealand from the United Kingdom in 1850, after working for the London Morning Post.

Though he did not settle in Canterbury.

“When they came out from England, he was with his second wife and five children. His first wife was his second wife’s sister, who died in child birth.”

“He only did that for about three years and then went farming in Taranaki,” he said.

In 1858 one of William’s sons, 14, died. But as the Māori Wars were fought in the region, ultimately killing more than 3500 people, Murray said his great-great grandfather was driven away.

Murray said there isn’t much information as to why the family left the North Island.

“This is only an assumption but the fact that his fourteen-year-old son was killed during this time may have had some bearing on why he moved so far away,” he said.

“When he got to Canterbury, he was the printer for The Press when it first became a daily, the first printer in 1863,” he said.

“So he would have worked in a little room with James FitzGerald.”

With four years of working side by side with one of the city’s most influential figures in FitzGerald, William decided to move south.

“In 1867 he only worked for The Press part-time and came out to start farming in Springston.”

The farm wasn’t fully established with dairy until 1869, when Collins Rd where it sits was also given its name.

William worked the farm until his death in 1895.

It was then one of his sons, Walter who took over ownership of the 67ha farm.

“He had a son and a daughter and his son, Leslie, stayed on the farm.”

Leslie was Murray’s grandfather, but died before he was born. He didn’t know much about the farm at this time because it wasn’t discussed by the family.

“The land would have still been worked with horses, up until my grandfather’s day. My father was the first one to have a tractor on the land.”

as Jack, took over in the late 1940s – where he worked his entire life.

But Murray said it was hard to get information on the family.

“Dad told us a few things, but my grandmother who would’ve known a bit more didn’t tell us anything.”

Jack was 25 when Murray was born, his older sister and younger brother haven’t had much to do with the farm since.

Sixty-seven-year-old Murray has lived his whole life on the farm – though not in the same house as the rest of the Collins family.

“Five generations of family have lived in the little cottage the first guy built it when he got here, then when I was a child, about eight, we bought a piece of land further up the road and lived there.”

In 1976, his parents bought the property across the road and built the house where Murray and his family live today.

“It was just a daily grind milking cows, but it was what I wanted to do,” he said.

Every day started at the crack of dawn, 5.30am, Murray said.

“There was milking all year round, not a lot of time for a break.”

He met his wife Judy on a blind date when he was 25, which “went well.”

Two years ago, Murray leased the majority of the farm to his neighbours, who continue to run the land as a dairy farm, but kept a small portion of the land to use for beef cattle.

“I’m retired, but I’ve still got 16ha I work myself, the rest of the farm is leased to a neighbour now,” he said.

“I gave up dairy only a couple of years ago and then on the 15ha I’ve kept to work myself, it was more sensible to run a few beef cattle. It’s not a massive beef enterprise.”

He said he’s got “a lot of catching up to do” when it comes to relaxing and going on holiday in his retirement.

“We’ve got a few vintage cars that we take our for runs every now and then.”

Murray’s daughter Jenny and her three children – Elsie, 3 and 18-month-old twins Henry and Leila – also live on the farm.

But the children aren’t quite

“They’ve got tractors in their toy box though,” Murray said.

The Collins family will still have a long connection with the farm, even though Jenny doesn’t see herself farming it.

“She doesn’t want to sell the property, but she won’t farm it herself,” Murray said.

There have been moments over the last 30 years where he has considered packing it in and selling it himself.