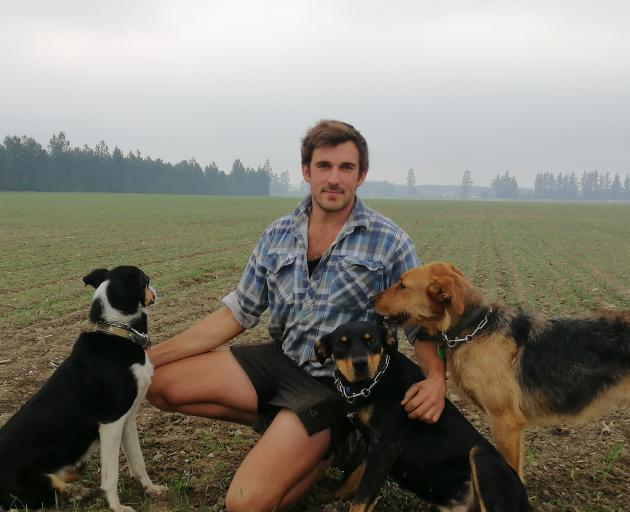 The Federated Farmers North Canterbury arable chairman's 732ha farm at Cust, near Oxford, grew over the decades as his grandfather and father expanded the original block.

The biggest decision the family had to make was whether to convert to dairy or stick with cropping when the Waimakariri Irrigation Ltd scheme was introduced in the late 1990s.

''Almost everyone around here converted to dairy, but we decided to continue as an arable farm with some sheep and beef finishing and to intensify our operation, which made sense as we had more water available.

''Our plan changed from constant expansion to intensification, which has opened up different doors.''

Over the past few years, Mr Taggart (28) has refined the farming operation to focus on a niche range of crops and contracts.

''In the beginning we said yes to every contract and grew a wide range of crops.

''We still have wheat and barley as our core crops, along with perennial rye grass seed and a couple of clover paddocks.

''It's important to focus on your core goals, rather than spreading yourself too thin.''

Mr Taggart said he was a keen advocate of precision agriculture and this type of technology had really lifted the bar in terms of efficiency and environmental benefits.

''Back in the day you had a basic tractor and had to rely on operator skill, but our new tractor has GPS and auto-steer, which takes luck out of the equation.

''We've also signed up for a new fertiliser spreader which has cameras to view the fertiliser being spread and adjusts automatically for wind.

''It's important to be as precise as possible and we want to be at the front of the pack when it comes to technology - it's better for the environment and saves us money when we use less fertiliser.''

Proposed reductions in nitrate levels were concerning for him as, while he believed everyone needed to take action, he was worried about the economic impacts, Mr Taggart said.

''We're a larger operation, so we can afford to invest in technology, but some farmers may not be able to, so I think we need a balanced approach.

''We all know that we need to make reductions, but how we go about it is the key.''

He was also a member of the Next Generation Farmer group (NGF) in the Waimakariri district.

''We only have a few arable farmers in North Canterbury but working together is the key to a sustainable future.

''The aim is to be a port of call for the zone committee and Environment Canterbury. We want to be part of the process.''