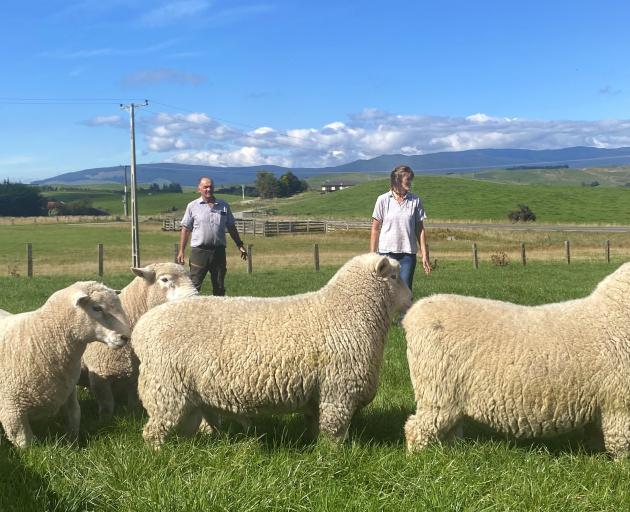 They had been farming steep, hard hill country — "some of the hardest country you’d get" — and there was not a lot different that they could do there.

Coupled with that, they were "absolutely smoked" with floods in the mid-2000s. In 2004, they were stuck in their valley for two weeks with no power and no phones, unable to get out.

It caused widespread damage on the farm. They had just finished the repairs from that when another weather bomb hit in 2006 and they were "back to square one again", Mr Addenbrooke recalled.

The couple wanted to be able to finish lambs and "doing things instead of just having to struggle away", Mrs Addenbrooke said.

While visiting a friend in Southland, they decided they really liked the region and decided to put their farm on the market.

They bought a farm just north of Tuatapere, bringing south their young family and about 11 unit-loads of "stock and stuff".

They had previously founded their Ruakiwi Romney stud in 1996 as Mr Addenbrooke had always been keen on stud sheep. They bought ewes from various studs to form the base of their new stud, slowing building numbers up.

When they moved south, they had to start afresh with their ram selling base. Initially, they supplied rams to several clients in the North Island but they realised that it was too far for people to come and look, so they started from scratch to build a client base, and were heartened by the response.

They brought their same philosophy south with them — everything was still run as commercially as they possibly could. They still ran a commercial flock and, once weaned, the stud lambs were weighed and the ewe lambs went in with the commercial lambs and stayed there until mated as two-tooths. 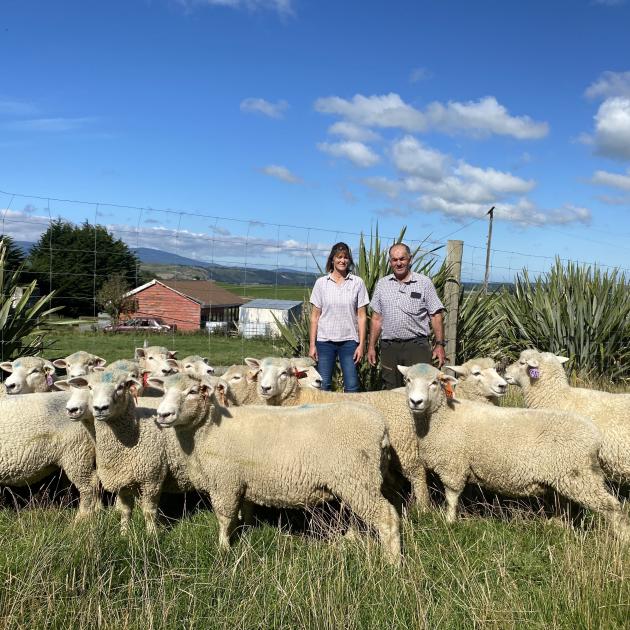 Fiona and Dean Addenbrooke inspect 15 ewes they recently bought from the Kikitangeo romney dispersal sale. PHOTO: SUPPLIED
At that stage, the couple went through and selected the type that they wanted. They had a big emphasis on type, with Mr Addenbrooke saying they were very fussy when it came to the likes of feet, leg structure, soundness and wool.

At lambing, the ewes were put on a hill block and lambs were no longer tagged at birth, as DNA technology was used. Survivability and mothering ability was tested and, when they weaned, it was "real commercial weight".

Coming from their North Island background, their sheep had to have constitution to survive. Shifting south, it was a different environment but it could still be harsh. The basics were the same for survivability and constitution, Mr Addenbrooke said.

When it came to an animal, he acknowledged he was "old school" — both he and his wife were in the pens looking at each sheep as they analysed whether they fitted their criteria.

But they were also aware that they couldn’t stand still in their business and they tried to incorporate new technology to "help speed up the process" while still retaining the fundamentals, Mrs Addenbrooke said.

They were pushing survivability and low inputs for lambing and, with the recent purchase of 15 ewes from well-known breeder Gordon Levet’s Kikitangeo Romney dispersal sale in Northland, they hoped to incorporate worm resistance. Kikitangeo started breeding for worm resistance in 1987.

PGG Wrightson livestock genetics representative Callum McDonald said it was good to see the Kikitangeo genetics sold across the country, including other sales to Otago and Southland. "It’s good to see breeders not letting these genetics get lost," he said.

Keen to be "always doing something", Mr and Mrs Addenbrooke were now in their sixth season with a dairy farm as part of their operation. Both found the breeding side of dairy farming to be interesting, having previously only had beef cows.

While it had been challenging, it also was all about enjoying stock in general. What was particularly interesting was there was "interest quantification for everything" in the dairy industry, such as seeing what paddocks were performing because of the milk that came off it.

"It’s much easier to see what’s happening with your breeding. There’s so many measures around compared to a sheep farm," Mrs Addenbrooke said.

When it came sticking with Romneys, Mr Addenbrooke believed you had options if you had a base to breed from. The breed also had constitution which enabled them to handle the environment and the country.

"When you start putting other things in, you open up a can of worms, you weaken your breed ... and then you wonder why the wheels are starting to fall off," he said.

Half their commercial ewes were mated to a Romney and the remainder went to a meat breed. They had been early adopters of eye muscling scanning and they had also pushed for fat depth. Ewes had to have fat on their back to survive, he said.

The couple travelled all over New Zealand looking at sires and they did not buy anything unless it fitted their criteria. Firstly, they had to "look right" for them, and then that was hopefully backed up by figures.

Crossbred wool prices continued to be in the doldrums and the couple were uncertain what the future would hold for wool, although they hoped that the industry would come right as it was such a great fibre.

With the Romney, they were getting quantity of wool and it cost the same to shear a sheep whether it was yielding 2kg or 4kg, Mrs Addenbrooke said.

Usually, the couple sold just over 100 rams and this year they sold four stud rams. When they sold stock, they sold animals of a type they liked.

"A lot of people say to me, it must be hard to breed a different type for different people [but] we breed the type of sheep we like," Mr Addenbrooke said.

The couple agreed they were passionate about what they did and they always wanted to achieve. Mr Addenbrooke believed stockmanship was something that had declined in the industry and becoming a stockman was harder now for young people, as there was not the hill country that there used to be.

It was harder for young people to "get out and learn" but, at the same time, those that were passionate about what they were doing, did a good job, he said.

When it came to new environmental regulations, Mrs Addenbrooke said they had already been introduced to Environment Southland rules when they converted their dairy farm so had already been "working down that path". "We’ve been exposed to it a bit earlier," she said.

Mr Addenbrooke said farming was not hard as long as you did the work. Not being able to feed stock was farmers’ biggest concern, whether it was through climatic events like drought, or snow falls; increasing rules and regulations from Government were now an additional worry.

The couple still got pleasure from their stock, with Mr Addenbrooke saying the "kick" they got came when they were loading a line of lambs on to the truck, knowing they had "done the job", or running the stud lambs in for tailing and seeing the quality.