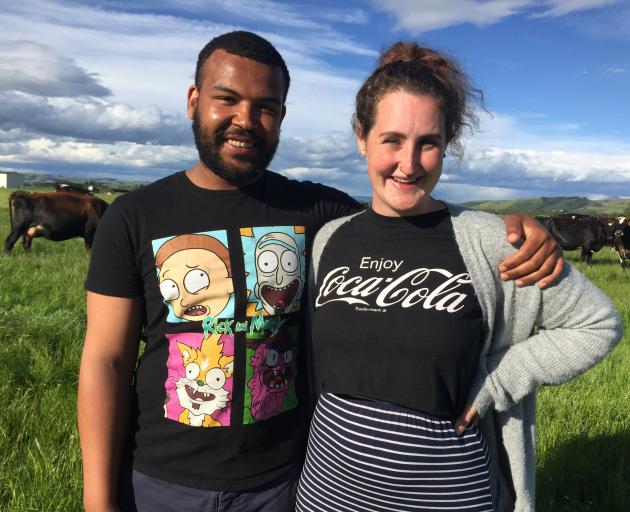 Covid-19 changed the plans of Daniel Bergin and Kerryn Brunton, who have ended up working on a dairy farm in West Otago — a far cry from their previous life in London. PHOTO: MARY-JO TOHILL
Just imagine having been brought up in highly urbanised London.

You’ve spent your career working in hospitality and you have only a rudimentary idea of where milk comes from. Then your Kiwi girlfriend tells you she’s got you a job on a dairy farm in the wilds of rural New Zealand.

That’s exactly what happened to Daniel Bergin (26) when he and Kerryn Brunton moved back to her hometown, Tapanui, from the United Kingdom in July.

More accustomed to pulling pints than a dairy cow’s teats, he’ll never forget his first day in the cowshed. 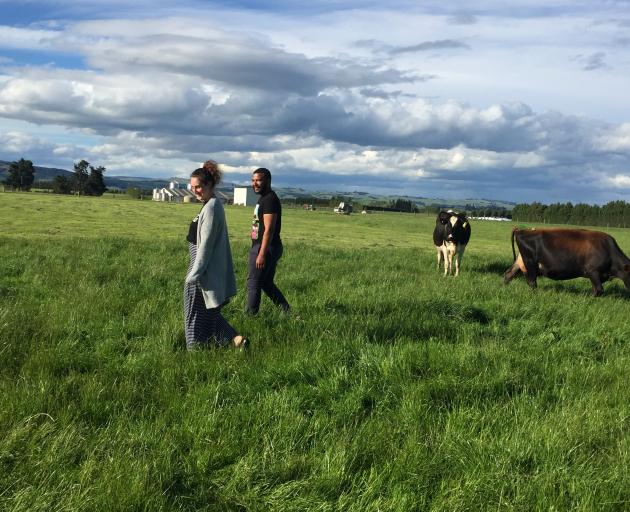 Miss Brunton (27) had also spent most of her working life in hospitality, although she had grown up in the Tapanui area, and started milking when she was 17 at the farm where her grandfather worked.

"I’d completely forgotten what it was like, and this was at a whole new level. They [the cows] didn’t know what was going on and neither did I."

The couple met two years ago at the pub they were working in, in Chiswick, west London, where Mr Bergin is from.

They had intended coming to New Zealand to see her family and to work so they could save up to travel to Asia. However, Covid-19 changed their plans and after many cancelled flights from the UK to New Zealand, when they arrived in May hospitality jobs were not an option.

Miss Brunton’s grandfather suggested she go home to West Otago because essential industries like dairying needed workers. They could have their own house on a dairy farm and a steady income. They jumped at the chance.

Mr Bergin clearly recalls "throwing the first one on" when he was shown where to put the suction cups, and his reaction when the cows got a bit agitated.

"I was pretty scared. I thought I would get kicked. And I thought I’ll never get used to this. The cows were high up, and their feet were level with my face. But the manager said don’t worry, take your time.

For a start he was a bit freaked, and did other jobs with the cows, letting Miss Brunton do the milking.

"But I’m amazed how quickly you do get used to it. Now I can be kicked, usually it’s just an accident, and it doesn’t really hurt, more like a hard jab."

"He’s done really well," Miss Brunton said. "Getting pooed and peed on, he’s coped really well. To pick it up as quickly and as well as he has is amazing."

His dairying experience had given Mr Bergin a whole new appreciation for dairying.

"I thought you put the cow on grass, you get milk and done. But there’s so much more to it."

The young couple had undergone much change in the past seven months.

"It has been quite a culture shock. I’ve grown up in a place where you could just walk around the corner to a cafe. Now I’ve got to drive five to 10 minutes. But it’s a little more relaxed and I like that," Mr Bergin said.

His father was from Jamaica and his mother English.

"I’m getting into the hunting and fishing. I’ve never really had the chance."

However, he was not enjoying the long drives that Kiwis did as a matter of course.

"We went to Twizel, and they said it’s just up the road. It was three hours away, and all I got was a tiny little fish."

But the biggest shock of them all was finding out that Miss Brunton was pregnant.

They will be parents in May, practically on the anniversary of their arrival in New Zealand.

Miss Brunton expected to keep working on the dairy farm as long as possible.

"I might have to stop milking if the belly gets in the way."

They could not have envisaged how differently things were going to turn out.

She had loved London and the convenience of being so close to Europe.

"But things have fallen into place. Both our parents had their children young."

She is an only child and he is the oldest of a large family.

"When I think about it, we met in his hometown and have ended up in mine."