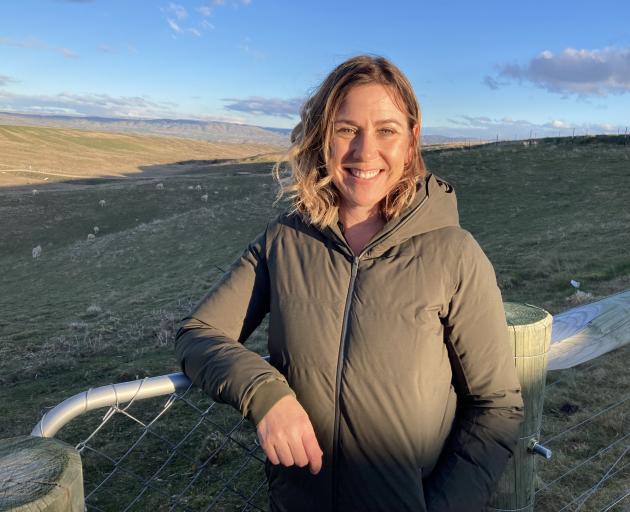 In fact, she was a few minutes late for her Southern Rural Life interview. Not strictly her fault.

One of the advantages of working from home during the alert levels is being able to keep an eye on the lambing.

The night before she had noticed one of her Wiltshire ewes having a difficult labour.

‘‘I could see she’d had a lamb way over the hills. With the binoculars I could see she wasn’t leaving the spot where she’d given birth, so I thought, there might be one there that’s not doing so well.’’

Since buying her 10.6ha of paradise near Alexandra a few years ago, the former diplomat and trade negotiator, now Central Otago District Council chief executive, has discovered the realities of keeping livestock.

Her flock of 30-odd Wiltshires had produced 12 lambs so far and a very high rate of twins. 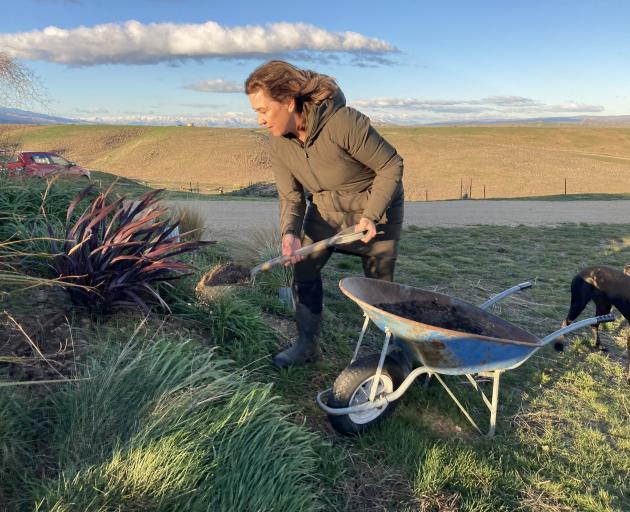 Sanchia Jacobs has acquired many rural skills since buying her lifestyle block near Alexandra about three years ago.
‘‘It’s always hard, the ‘passing away’ part, but I’m constantly reminded by farming friends that livestock/deadstock, is part of the same equation.’’

She was also learning about the challenges of farming on a desperately beautiful landscape, with a lack of ‘‘naturally occurring’’ water, i.e. rainfall; also about the years of overabundance of grass, which produced a fire risk on this windswept land.

‘‘It’s a total learning curve. My mum comes from a farming background, and we had a couple of animals, sheep, goats that sort of thing in Dunedin, and had a pony, but none of that’s farming of course. A goat on a rope does not a farmer make!’’

She had learned the value of a good quick-pull cable ties, sawhorses with a sack between to lay the lambs down, and had been introduced to the rudiments of fencing.

‘‘Oh yes, but would the fence stay up? That’s another story! There’s a few things I’ve had to work out, things like with the lambing, that was a new experience for me.’’

She believed that working from home, as handy as it could be, meant longer hours, because all the communication had to be done online, but had identified a key difference from last time.

‘‘I think with the last lockdown there had been a different sort of urgency, for instance with the Civil Defence work, with what was happening overseas, we were seeing mass graves, and all those sorts of things being done, that we needed to consider. We were talking, where we can put bodies, and that’s not part of the conversation thankfully, but maybe without that urgency there’s a little bit more groundhog-day sort of a feeling.’’

Her family has strong connections to Central Otago that go back to the beginning of European settlement in Fruitlands. Her father lives at Cromwell.

She stayed with him for the first six months when she arrived in 2018. Living in town was never an option despite the 20-minute trek into the office.

‘‘But I knew having left Central Auckland I didn’t move down here to feel like I was still in Central Auckland, so I was quite determined I would have that sense of isolation and profound landscape, so that was a key criteria.’’

Her 360-degree view takes in the Hawkdun Ranges and Alexandra basin, and is a place her 20-year-old daughter Cueba, who is at university in Dunedin, enjoys coming to.

‘‘I think Central Otago is my forever place. I am constrained a little with a very small house.’’

Her builder/partner Lindsay Breen may be recruited to help out there, if they can figure out where to put an additional room or space on the compact site that is backed by a substantial garden bund. ‘‘The benchmark has been set very high with this property. I really like being out of Alexandra and being on the land. I love in the morning just being able to go out in the paddock. It’s like being in a coastal area and going out on the beach, it gives you that same sense of calm, welfare and revitalisation, I think.

‘‘Lifestyle blocks are a great place to sink money, and a really bad place to get any back, and that’s a commonly known fact, and you don’t appreciate it until you’re sinking your money.

‘‘I think in the main I’m going to keep it as it is. I live here, because it is relatively underdeveloped, and I like that. I don’t want to over-process this land, this place doesn’t need or require that ... and I think it would take away from where we’re at.’’

At the moment the property is in two big paddocks, so she may think about fencing and how to get the best out of the land for grazing.

‘‘If I get my way we’ll probably see another couple of animals coming in. The dream of a llama, a pig a donkey a sheep, definitely a cow sort of thing, it’s probably not going to be realised because my work schedule doesn’t enable me to be here to offer the care and protection that some animals require, each day.

‘‘The Wiltshires work well on the land. From time to time, friends graze horses and I love that and would love to have horses here more permanently but it’s probably unrealistic at this point.’’

She has Maori heritage. Her iwi is Ngati Maniapoto of the Waikato-Waitomo region. When the Central Otago District Council carried out a major renovation and rebuild of its Alexandra offices recently, she was pleased that there was support for creating rooms and spaces with Maori names to reflect some of the district’s pre-European heritage.

Life on the land is keeping the high flyer grounded. Prior to her job in Auckland she was flying a lot as a diplomat and trade negotiator.

She reckons she’s the envy of her Auckland friends.

‘‘I live in absolutely the best place in the world, and everyone knows that ... with the pictures I hound them with, relentlessly sending them pictures of this place, and talking about the lifestyle that I have here, not just on the block, but biking and hiking, and getting into the outdoors.

‘‘The challenge is ... there’s a limitation you can do with your career in some respects, and that imposes questions, and think it is a question that people in Central Otago who have had broader, more global careers have to grapple with.’’

In her early 40s and on a five-year contract, Ms Jacobs said she would not have come home if she did not think she had something to contribute.

‘‘This is where I always wanted to end up, I just didn’t think I’d get here this quickly.’’

She could imagine staying in local government in some way.

‘‘We are incredibly fortunate with the council we have, and I’m reflecting on that because maybe there’s other parts of the country that aren’t so fortunate right now that we’re seeing in the news and the media.

‘‘We’ve got a very good council, at a capability level, but also at a human level, they’re nice people, they’re reasonable people, that you can have a joke with, because so much of what you do is so serious. We have a fantastic mayor [Tim Cadogan] and he works bloody hard.’’