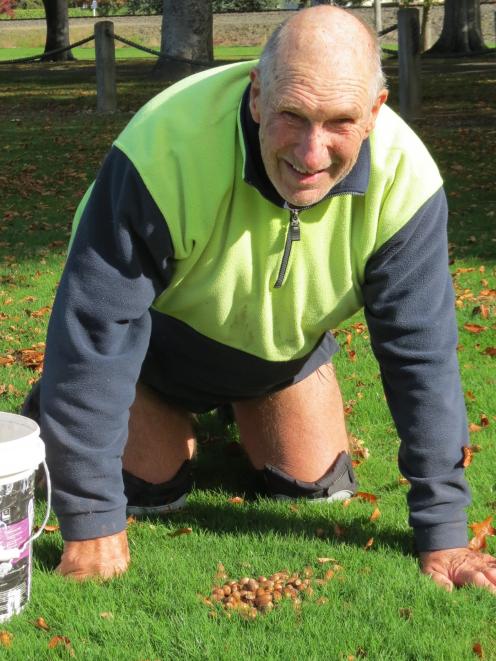 Gathering nuts in May ... Gavin Roy, of Gore, has spent ‘‘the thick end of a fortnight’’ picking up acorns to feed the ducks on his favourite pond.PHOTO: YVONNE O’HARA
After seeing Gavin Roy on his hands and knees under one of Gore’s oak trees with a bucket, one might assume he was taking environmental tidiness just a shade too far.

However, he had good reason — he has got mouths to feed.

Mr Roy, of Gore, has been a keen duck hunter since his childhood and when Southern Rural Life talked to him, he was collecting acorns to feed the ducks that frequent one of his favourite (location-undisclosed) duck ponds.

He said he had spent ‘‘the thick end of a fortnight’’ picking up the acorns (in his own bubble), and had filled eight sacks.

He used to use a leaf rake to gather the acorns but found he got too much rubbish, so now wore knee pads and crawled about on the grass under the trees on his hands and knees.

‘‘I have gone duck shooting all my life, ever since I was 16 and my father let me have a shotgun.

Mr Roy, who is a retired sawmill worker, along with Joe the enthusiastic Labrador, and two friends, traditionally gather together at the mai mai during opening weekend, and then on the Sunday after that day’s shooting, they will meet to pluck and freeze the ducks.

They had been looking forward to the opening of the season, traditionally held on the first weekend in May.

However, this year it has been delayed for a few weeks because of Covid-19 and associated restrictions.