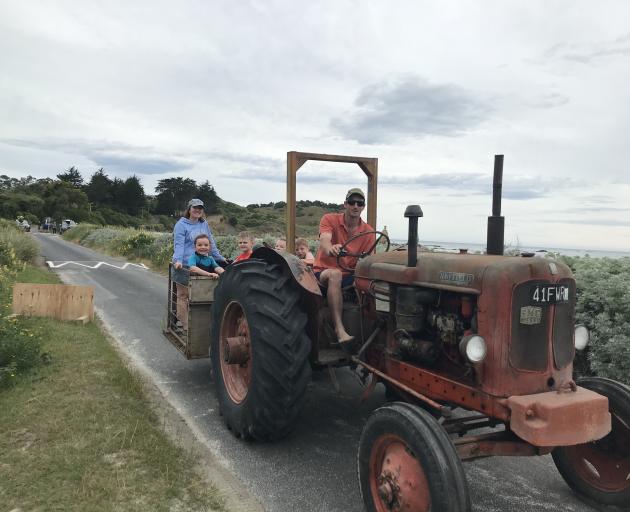 East Otago farmer Will Heckler shuttles precious cargo back to the holiday house after a day at the beach. On the back are his wife, Laura, with Ria Heckler (5), Taj Morey (8), Lucia Morey (9) and Luke Heckler (6). Photo: Alice Scott
East Otago farmer Will Heckler has found a handy mode of transport for getting to the beach and back from his Karitane holiday house: a vintage tractor.

Mr Heckler’s wife, Laura, said while she did not like being part of the ‘‘spectacle’’ the old tractor and its implement made as they rumbled between their holiday house and the beach, it was worth it.

‘‘It saves the vehicle getting full of sand. We can just throw everyone and the gear on the back of the tractor and sort it out back at the house,’’ she said.

Mr and Mrs Heckler enjoyed a break from their farm over the festive season.

Their holiday home was located a handy ‘‘25-odd’’ minutes from their farm at Stoneburn near Palmerston.

‘‘It’s close enough that I can whip back and feed dogs and get work done when I need to and then be back to enjoy some down time too,’’ Mr Heckler said.