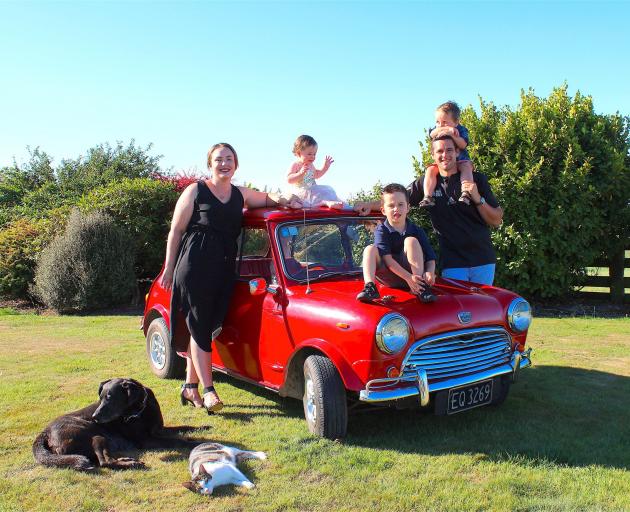 Southland dairy farmers Jess and Don Moore with kids Violet, Harry and Lachie. PHOTO: SUPPLIED
"Like all good stories, it began with a boy."

When Jess Moore moved from Melbourne to Gore, she had no knowledge of farming, nor did she even know where the town was. Fast forward a decade or so and she is proud to be a Southland dairy farmer.

After almost nine years of marriage and three children, Mrs Moore and her husband Don have now bought their own farm northeast of Gore, having made progress through the industry.

Mrs Moore particularly loved how willing people in the industry were to share their knowledge and experiences.

They were a young couple, not from a farming background, and had taken all opportunities available and immersed themselves "in as much dairy as we could".

"We just went with it and kept going and haven’t stopped," she said.

Originally from Governors Bay in Canterbury, Mrs Moore grew up on a lifestyle block and had always had a love of land and animals.

After an "adventure" overseas left her feeling homesick, she returned to Christchurch but decided she did not want to stay in the city.

At the same time, a friend was being transferred to Gore as a rural bank manager.

Describing it as an "awesome wee town", she worked in a pharmacy and met her future husband through Young Farmers. He was a deep sea fisherman and the couple later moved to Nelson.

Mr Moore would be away working for six or seven week stints. Mrs Moore quipped that she eventually became "sick of having an imaginary boyfriend", and told him he needed a job where he was around more.

"He said ... ‘if I’m not fishing, the only thing I want to do is be a dairy farmer in Southland’ so we returned south."

Between 2008 and 2010, the couple managed 850 cows on Benio Dairy for an absentee lower order sharemilker.

They entered the Dairy Industry Awards and won the farm manager of the year title for Southland in 2010.

Initially, Mrs Moore had a part-time job at a pharmacy but soon realised that if they were going to give farming a go, she had to "understand 100% what it was about" - so she asked for a full-time job on the farm.

When their employers finished their position, it was offered to the couple; they were introduced to staff recruitment and business management while staying on the same farm.

When they wanted to continue their growth and careers, they approached the farm owners about the opportunity to enter a 50:50 sharemilking agreement, milking 1000 cows.

In 2013 the couple won both the Southland and national titles in the sharemilker section in the Dairy Industry Awards.

In June last year, the family bought their first farm which they named Koromiko, after the Marlborough area where Mr Moore grew up.

As Mrs Moore told The Otago Daily Times that it was "pretty cool" to venture into farm ownership, the family was out fencing. Sons Harry (7) and Lachie (4) and daughter Violet (nearly 3) all loved being on farm.

"We went farming so our kids could farm as well, so we bring them along as much as we possibly can. When we’re fencing in the sunshine in Southland, there’s no reason [why not to]."

As well as Koromiko, the couple also lease a run-off block 5km down the road for their young stock, and a dairy farm at Rimu.

In the future, Mrs Moore said the couple intended to "just keep growing the business and the people that are in it".

She has become active in the Dairy Women’s Network; she is regional leader for Gore and is involved with organising the organisation’s national conference in Hamilton this year.

Being involved with DWN was fun and provided opportunities and connections with like-minded women.

"I wanted a tribe to keep me safe and secure and let me grow as myself. And these ladies get it; we’re all the same and that’s what I love about Dairy Women’s Network.”

Upcoming network events included "Learning to Dance in the Rain", a workshop in conjunction with DairyNZ, in Winton on March 10, and another collaborative workshop, "How to Be A Bloody Good Boss", in April. The DWN would also have a presence at next month’s Southern Field Days at Waimumu.