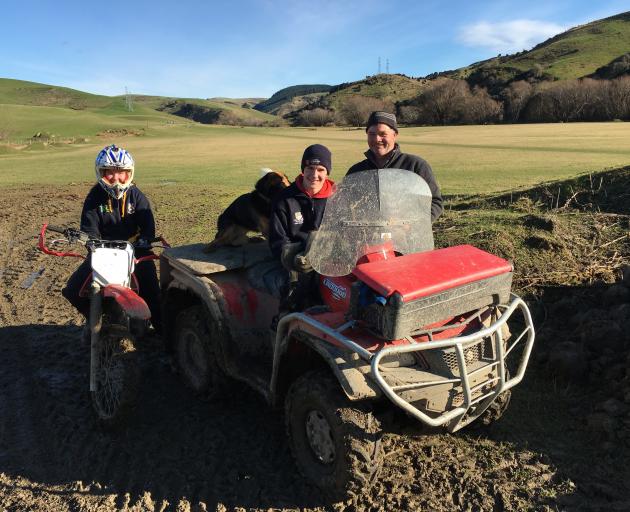 Jamie Benington (right) with his youngest children, Connie (left) and Jaxon. Photo: Brent Melville
Jamie and Sally Benington have been farming Craigellachie Downs, near Beaumont, for the past 17 years.

Their focus during that time has been on growing some of the best quality Romney-Texel stock in Otago.

They were handed the reins to the 206ha sheep and beef farm in 2002 by Jamie's parents John and Anne Benington, who had acquired rights to the hilly property from the Athenaeum Mining Institute in 1965.

For the Beningtons, stewardship of the land has been a real family affair and their three children, Fletcher (20), Jaxon (17) and Connie (15), have all mucked in, along with granddad John, who, at the age of 83, still lends a helping hand when needed.

The Athenaeum Mining Institute, formed a century before the Beningtons took over the lease, is a supportive landlord. Funds from the farm and its other properties - including the site of the Lawrence Library - are invested back into the local community in the form of library books, historical literature and education scholarships.

The farm now runs 1450 ewes and 440 hoggets, and the Romney-Texel rams were sourced from Nathan and Brian Howden out of West Otago.

Craigellachie's lambs head to Alliance, while the wool is split between CP Wool and Wools of New Zealand.

Like his father, Mr Benington has done a lot of shearing and he works to an eight-month shearing cycle. He, like most crossbred-sheep farmers, is not shy about venting concerns over poor wool returns.

''The volatility of the commodity market for wool has been extremely disappointing.

''For us, it's at a point where wool is simply not viable as a business stream. Even shearing and compliance costs aren't being covered by current returns.''

An added issue for the low lying farm, however, is wool colour quality, dictated also by the region's weather patterns.

''We operate in the type of landscape and growing conditions where we find it difficult to hit quality requirements on a consistent basis, particularly for tight spec contracts like lambswool.''

Given the variability of its growing season and to de-risk the overall business, the Beningtons send about 100 bulls to store every season and have a contract for 100ha of fodder beet.

Mr Benington also owns a half share in a 80ha block of forestry in nearby Tuapeka West, consisting mainly of radiata pine with some Douglas fir which they have held for the past 27 years.

Mr Benington said while the forest was part of the carbon trading scheme, in his view the Government was missing a huge opportunity to promote further growth on farms by recognising existing plantings in unproductive farming areas.

''It's disappointing to me that Government's definition of forestry doesn't extend to what we can plant into unproductive farming areas. We need to incentivise farmers to do just that.''

One of Craigellachie Downs' claims to fame is its annual trail ride, which has been running for the past 12 years and last year attracted some 1100 riders.

The event, held on the third weekend of February, traverses several properties across two loops of 40km each.

''It's a trail ride and not a race, though that's not to say that the riders don't go fast. It's really taken off over the past few years and attracts a wide cross-section of people, from as far as the North Island.''

It's a noisy event, but Mr Benington reckons the livestock have become used to the action.

''It's a well-organised event and certainly doesn't impact our farming operation at all.''

For those who do make the trek, the reward is some of the best landscapes for offroad driving, with views of the rugged blue mountains and the occasional deer, as the area is also home to one of the largest herds of wild fallow deer in the South Island.