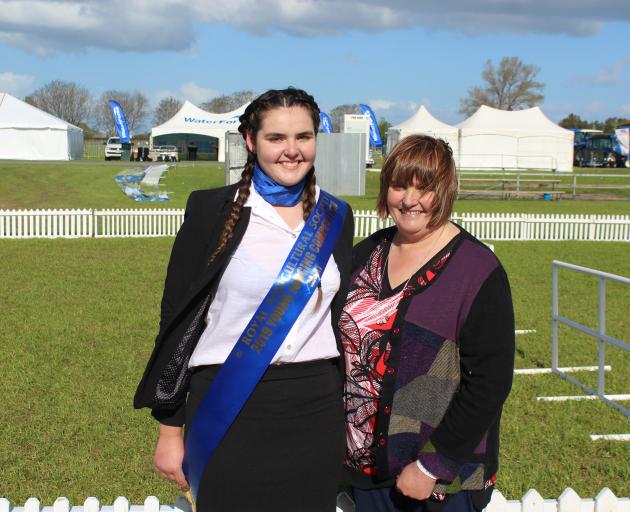 Linsey Bennett, of Tuatapere, was thrilled when her daughter Julie Skedgwell (16), was named national reserve champion in the dairy judging (cows and calves) during the New Zealand Royal A&P Show, in Hastings, last month. PHOTOS: SUPPLIED
Julie Skedgwell, (16), of Tuatapere, got a hug from her mum and a dinner out after becoming reserve champion in a national dairy judging competition in Hastings recently - despite being extremely nervous.

The James Hargest College pupil is a fourth generation Jersey stud breeder, with her own stud, the Mount Brook Stud.

Sister Alannah (17) also has her own Elms Lake Stud.

Julie was named reserve champion in the dairy judging (cows and calves) and Lisa won the New Zealand Meat Breeds Sheep Young Judge of the Year competition and was second in the Beef Young Handlers Class.

"I was very nervous," Julie said.

"It was the first time I competed at a national level.

"I did not think I would even get a place and it was quite a surprise when I did."

She said the public speaking portion of the competition was most nerve-racking, as they had to justify their decisions to the judges and the crowd.

The two young women were selected to represent the southern region following a training day and junior judging workshop at Rob Hall's Waikaka property earlier in the year.

Julie's mum Linsey Bennett accompanied her to Hastings for the competition, along with Mr Hall, who is the RAS southern district's treasurer.

Ms Bennett was delighted with Julie's success and she was "one very proud mum."

"The whole family is really proud of how she has gone, especially for a 16 year old.

"Both girls acquitted themselves well and did the southern district proud," she said.

The girls had spent some time at the Halls' property shortly before going to Hastings, to learn more about beef judging and public speaking, which they found daunting. 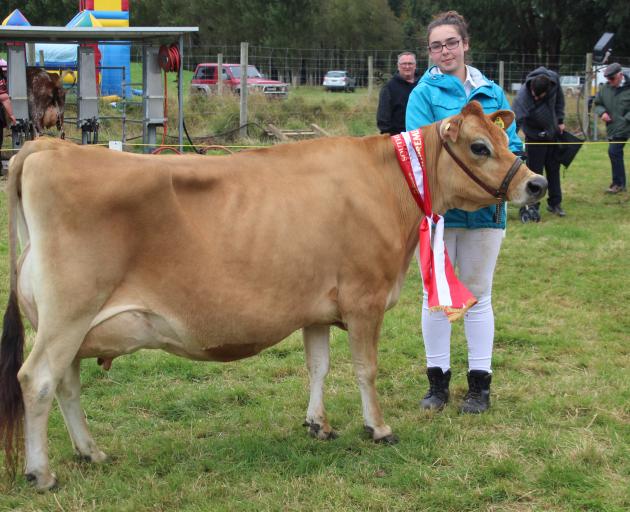 Alannah Skedgwell (then 15), was delighted when Elmsbrook Lees Pebbles VHC 96, won the Supreme Champion Jersey at the Southland A&P Show in 2017. Pebbles was Southland Jersey Cow of the Year for the 2016-17 season. The Skedgwell family, of Tuatapere, runs four Jersey studs.PHOTOS: SUPPLIED
Breeding Jerseys is a long-time family tradition for the Skedgwells.

"I have got a father and grandfather who had Jersey studs and Mum comes from a long line of Jersey breeders."

Her parents and grandparents started Elmsbrook and Beach Valley studs.

The family have the four studs on their 157ha contained property in Tuatapere, running the 320 cows as well as young stock and breeding bulls.

"We are very passionate about our cows and love them to bits," Ms Bennett said.

"We have been sitting around the breakfast table, discussing cows and bulls and mating and working out which cow goes to which bull."

Julie is also a Jersey enthusiast.

"I think the Jersey is an all round good animal," she said.

"I have always wanted to breed my own cows.

"Mum and Dad have always done it and I am the fourth generation to breed Jerseys.

"I have more of a connection with them and they are lot more friendly than other breeds, and have more personality and are quite characters."

A few years ago when the Waiau A&P Show celebrated its 75th show, Ms Bennett and her sister Gaylene realised her family had been competing at the show for 70 years and thought it would be wise to sort through boxes of memorabilia belonging to their parents and grandparents.

"We were gobsmacked when we found prize cards from 1947 when they [the family] first won at the show.

"They had won many awards over the years.

"It is an honour and a privilege to be able to carry [the tradition] on."