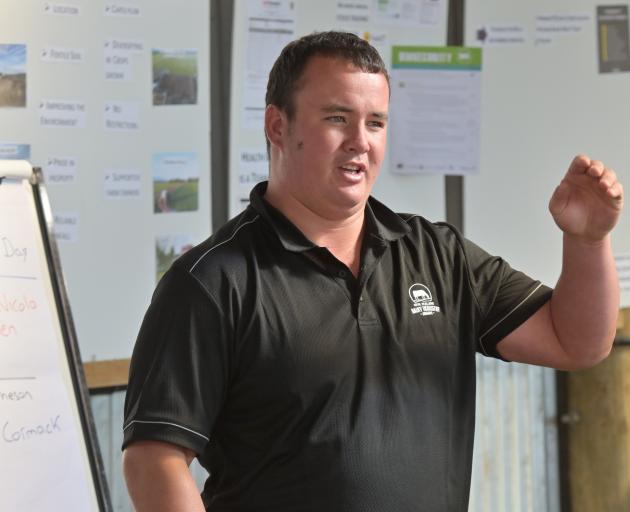 It has been a meteoric rise for a young man who had never previously considered a career in the dairy industry.

Now he and farm owner Chris Lawlor were endeavouring to help other young people follow a similar path through an innovative initiative.

Mr Matheson won the Southland-Otago farm manager of the year in this year's New Zealand Dairy Industry Awards. He outlined his career pathway at a field day on the Taieri last week on the property of regional Share Farmers of the Year Cameron and Nicola van Dorsten.

Presentations were also made by Mr and Mrs van Dorsten and Southland-Otago dairy trainee of the year Caycee Cormack. They will represent the South in the awards' national final.

Cameron Van Dorsten, speaks at the field day held on his property last week. Photo: Sally Rae
The winners will be announced at a black-tie awards dinner at the TSB Arena in Wellington on May 11.

Brought up in Clinton and after leaving Gore High School, Mr Matheson worked at the meatworks in Mataura for three months before deciding it was not the job for him.

Being a reasonable rugby player, he said he would stick around to play rugby - if he could get a job.

His coach's brother was looking for a worker on a dairy farm and he decided he would give it a go.

''I didn't really think much of dairy farming at the time. Most of what I'd heard was bad,'' he recalled.

But he was very pleased he took the opportunity and, after about six months on farm, he realised it was a career that he was keen to pursue, with the aim of progressing to a management position.

He has now been at Tarrington Ltd for eight seasons, moving from trainee to herd manager and then up to manager. 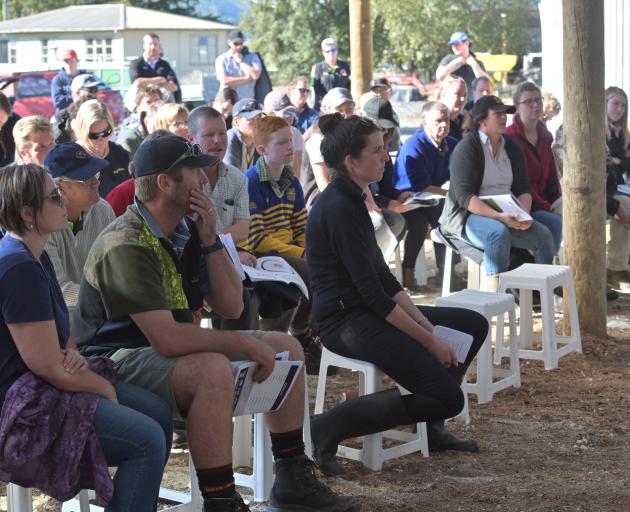 Attendees listen to speakers at a field day on the Taieri property of Otago Southland Share Farmers of the Year winners Cameron and Nicola van Dorsten. Photo: Linda Robertson
Mr Lawlor, whom he described as his farm mentor, was at present living in Australia so the day-to-day management of both the run-off and the dairy platform was done by Mr Matheson and his team.

Other responsibilities outside of day-to-day management included strategic planning with the farm owner, contributing and adhering to the financial plan, recruiting, hiring, training and managing on farm staff, and putting together feed budgets.

His passion was people management. After not realising the potential for a great career in dairy, he intended to make that better known to young people.

Staff on farm were encouraged to put overtime pay into stock, which would then be raised with the other young stock and milked into the herd, to increase their equity.

That was a similar pathway Mr Matheson had used for his own equity growth which allowed him to purchase a neighbouring 35ha block last season, which had been incorporated into the platform.

He had built up a herd of 250 cows, which he then sold back to his employer, which provided him the step to move into land ownership.

Just over two years ago, Mr Lawlor started an MBA and one of the projects that came out of that was trying to replicate what Mr Matheson had done, but with other staff.

Using that overtime to purchase stock meant they then had something they ''can't spend at the shop or buy a new car with''.

That system could be replicated over three or four people - ''or even more'' - as what he likened to a new version of sharemilking.

''At the moment, we're just trying to provide opportunities for people. If I didn't happen to fall into the job, I probably wouldn't have gone dairy farming. I didn't know about it. I want to get out to younger guys, it's an option,'' he said.